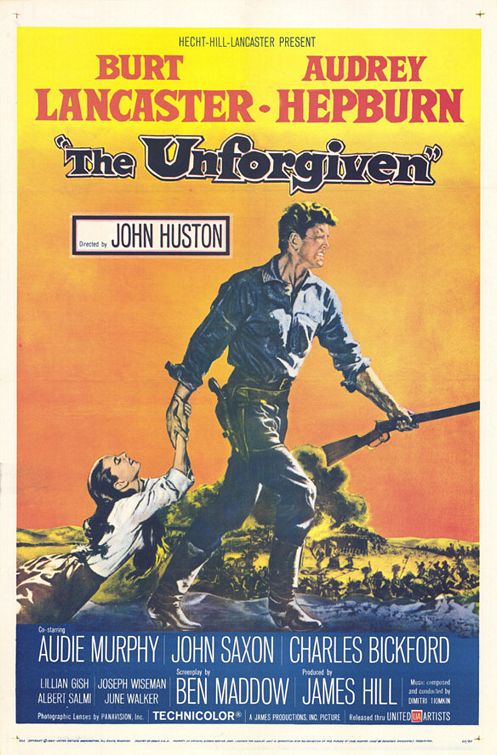 There were conflicts everywhere during the making of the film. Lancaster and Huston were so at odds that at one point, Lancaster steamed off to play a game of golf. Huston hired an airplane, bought 2000 golf balls with Mexican swear words on them, and dumped them on the golf field so Lancaster couldn't play golf. At one point, Audie Murphy went boating and his boat capsized.  He was saved from death by a female photographer. That was not the end unfortunately.

Audrey Hepburn suffered a bad fall from her horse, and spent six weeks in the hospital. When she came back for shooting, she had to wear a back brace. Then she had a miscarriage. This was her only western.

THE PLOT:
The Zachary's are a proud family of five on the Kansas frontier. Mattilda is their mother, and she rests easy. Ben is the eldest son, he is charming, and well respected within the community. Rachel is his adopted sister, who is carefree. Cash is quick and easily made angry. Andy is still a boy, yearning to experience manhood. Their father was murdered in a Kiowa raid, so they hold a grudge against the tribe. One day, Rachel sees an old one eyed man, who stares at her peculiarly.

When the man visits her home, her mother picks up a shotgun, and threatens to kill him. She doesn't, and in no time, her brother Ben comes home from a cattle drive to Wichita. They hold a dinner for a neighboring family, and Ben's partner in the cattle drive. Flirtations abound, and Charlie Rawlins, a neighbor, asks Ben permission to date Rachel. He begrudgingly agrees, as he loves his sister.

Then one day, a local Kiowa tribe shows up on the Zachary's doorstep, claiming that Rachel is one of their tribe. The racist town quickly begins to turn against the Zachary's, and even the family itself begins to question their loyalties. 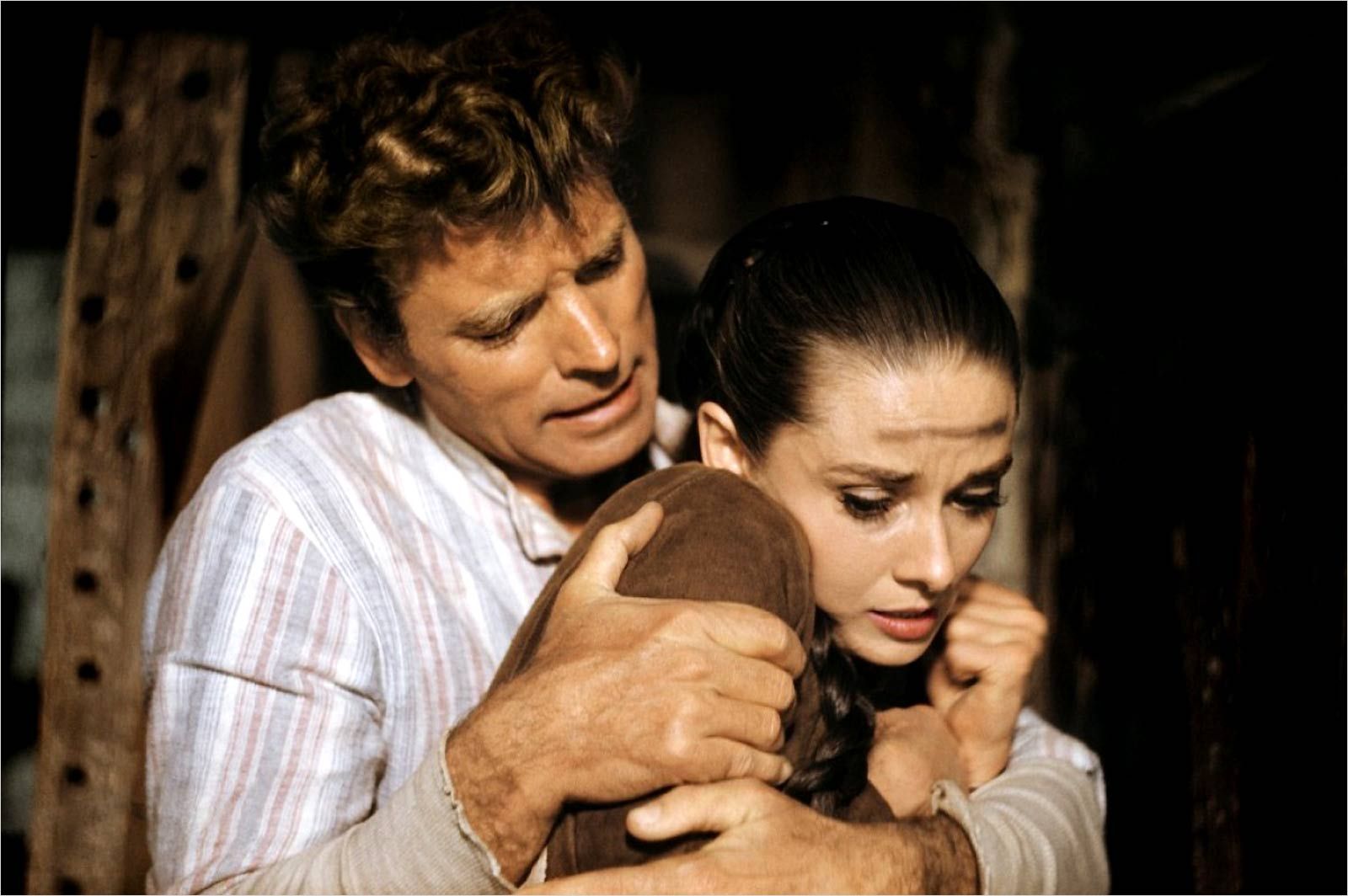 As you read above, the film had a tough time making it through production, and Huston and Lancaster were constantly at odds. One meant for the film to be a straight up western, while the other meant to make a serious commentary on racial relations in America. Obviously their visions clashed. This could have made for a very interesting hybrid, but unfortunately, it was Lancaster's vision that reigned supreme, and the film was a pretty ordinary western, stylistically.

I do wish that Huston could have had his way with the film, and created something different. However, some of Huston's vision still remains. These parts feel stylistically different from the rest of the film, which made the film a little muddled. However, it is still an interesting film.

I am a big Hepburn fan, and this was a very interesting performance. She gave her typical charm in the first half,  but in the second half she showed her shame, and confusion at her circumstances. It reminded me of a similar performance in The Nun's Story. Lancaster has always been an interesting actor, at least for me. At his best, he shows man ferociously in love with his sister, and yet ashamed of her roots. At his worst, well, he is stilted and his delivery feels forced. Thankfully, he is at his best for most of the film, especially during the thrilling climax.

War veteran Audie Murphy gives the best performance of the film, however. Cash is a force of nature, his blithe hatred of the "injun" runs deep. He is the most fully realized character in the film. Lillian Gish is good as well, and her performance reminds me of her similar character in The Night Of The Hunter. The cinematography perfectly captures the sun-baked landscape of the west, as most westerns do. I found nothing particularly special in the way it was shot, nor in its overall look.

The score is over the top on strings in the way all Tiomkin scores are. It is unmemorable to say the least. Huston's direction is good, but I feel as if he was holding back a little. The film was certainly ambitious, for a western at the time, and I cant help but feel as if the film had great potential, but it wasn't carried out in the way it should have been. I really do wish that Huston could have had his way, it would have made a much more interesting film.

There are of course two things that some may find shocking. For one, Ben's love for Rachel. It goes farther than brotherly love, and indeed, at the end SPOILER ALERT! they decide to get married. SPOILER ALERT! I understand that they are adopted siblings, but I find it shocking that this kind of taboo subject was seemingly okay in 1960. Still, that was the year of Psycho...

The other concern of mine applies not only to this film, but most westerns of the period as well. The racism is so rampant and seemingly accepted, that I felt incredibly sorry for the native Americans who are killed because one of them wants to see his sister. Indeed the prejudice is so shocking, that it even surpasses The Searchers, which is incredibly racist as well. I don't want to seem all PC, but at points it can be shocking. Cash threatens his sister, whom he loved and grew up with and knew all his life, just because of her origins.

I can see why Huston would want to make this film a political allegory, especially for the times, with the civil rights movement and all the turbulence that would come along with it. However, getting back to the film, the racism is bad, and it doesn't sit well or the viewer to watch people being slaughtered. It isn't as if they are completely innocent, but they are not the scalping monsters the film makes them out to be.

I do wonder what the title has to do with the film. Who is The Unforgiven, is it Rachel, can she not be forgiven because of her roots? Is it the town, for rejecting a respected member just because she was born of native American parents? Is it Ben, for wanting his adopted sister? I guess given the date and context, the first explanation is the one that is most applicable. Or perhaps they just thought the title sounded really cool (it does).

Anyways, I am not saying the film is bad. It is quite watchable, even entertaining. It is suitably dramatic, at points and light at other. The climactic shootout and the first hour are a bit too long, but it gives you time to meet the characters. It may not be Huston's best film, but it is interesting enough to hold your attention for 121 minutes. It sounds like a failure, but it feels like what it is: a western.

Email ThisBlogThis!Share to TwitterShare to FacebookShare to Pinterest
Labels: conflicting visions, John huston, set in the past, western