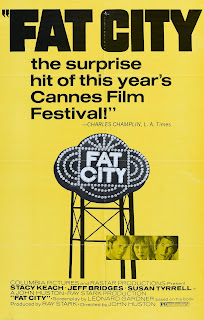 THE FILM:
In the early 1970's, John Huston was right in the middle of what he would later call his "dry period". During this period, which lasted from Sinful Davey to The Mackintosh Man, he would make what he would later call some of his worst films. However, right in the middle of this period was a film that was odd for Huston. It was a critical hit after it's premiere in Cannes, and it's story about boxing and redemption seemed odd for Huston.

The cast was a bunch of unknowns, Huston originally wanted Marlon Brando in the lead, but when that came to nothing he turned to then unknown Stacey Keach. In the role of a young boxer he cast Jeff Bridges, fresh off his debut in The Last Picture Show. He also cast first time actress Candy Clark and Susan Tyrell. The shooting was uneventful and the film was critically praised upon release, but it did nothing commercial, and has faded into somewhat obscurity, which is really too bad, especially for a film that is so interesting for Huston.

THE PLOT:
Billy Tully is a broken down boxer approaching his thirtieth birthday, and one day he goes to the gym to work out, when he meets Ernie, a young boxer. He tells the boxer to go see his old manager, and he does. Then Billy goes to a bar, where he meets Oma and Earl. Oma is a loud mouth, and she is drunk. Then Billy goes home and Ernie goes to meet Ruben, Billy's old manager. Ruben sees talent in Ernie, and immediately signs him on.

Meanwhile Billy, unable to hold a job, goes out to pick onions, looking for some work. After work, he heads to a bar and meets Oma. Earl has been sent to prison, and she is all alone. They talk for a while and then Billy convinces Oma to let him take her home. They start to live together, and Ernie begins losing fights. Then Billy goes to Ruben, as he has decided he is going to box again.

This is an unusual film. Up until now, I've always been able to pinpoint Huston's style, maybe it isn't continuous, but usually I can identify a film as a Huston. This is an exception to the rule. When I was watching this film, I could find no link at all to Huston. The closest cousin to this film's style would be an early Scorsese. It is the grittiest of the gritty, and the whole thing sparkles with 70s grime. It feels nothing like a Huston.

In the lead role, Stacey Keach must have known this was his shot, and he plays it like it. His portrait of a down on his luck boxer is intense, especially with his scenes with Susan Tyrell. Their scenes are frighteningly realistic. Keach fills his role with great gusto and life. Billy Tully feels like a real guy, and Keach doesn't make him sympathetic either. No, that job belongs to Jeff Bridges. Bridges is certainly very good, but his character seems very one note.

However, his scenes with Candy Clark are well done, and he is certainly a good actor, but Ernie is really a one note guy. Nicolas Colestano as Ruben is excellent, and his manager is full of life. However, aside from Keach, the film's greatest performance comes from Susan Tyrell. She is excellent as Oma, a bundle of nerves who alienates everyone she loves, it's a great performance. Her scenes with Keach are some of the film's best.

The film was written by Leonard Gardener, adapted from his own novel. The film isn't breaking any new ground with a story of a down on his luck boxer, but Gardener fills his script with enough interesting scenes to keep it from being tired. The score is good, and the opening song sets the mood nicely. Earlier I spoke about the scenes between Keach and Tyrell as being some of the films' best. That is true, but the films best scene is definitely the ending. It speaks volumes without saying much.

The cinematography by Conrad Hall is very spare, shot in brown, dingy hues. It succeeds at showing a world that exists, but no one wants to admit exists. This brings me to Huston's direction. It's very interesting. As I said earlier, the film seems more like it was directed by someone else, but what does that have to say about Huston's direction? Well, for one, it shows exactly how much range Huston had as a director. To compare this to something like The African Queen seems odd, but that they were directed by the same man shows exactly how much talent he had, and how he wouldn't conform to a single genre. 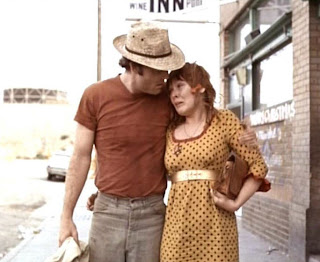 The film is certainly very well made, but it can be hard to watch. I don't quite know how to describe it, other than to say that it just feels too gritty and depressing. It gets hard to watch after a while, until near the end. Then there is the film's subject. It is about boxing, so there are scenes were characters box. To be fair, this isn't exactly Raging Bull, so the boxing scenes aren't outstanding. They are well shot, and because you care about the characters, you have some investment with them, but they go on for a little to long and they could have been cut.

Overall, this is not a bad film at all. It's quite good actually, but it feels draining despite how excellent the performances are. If you feel like a boxing movie, this is one of the best. If you feel like a Huston, this is about how atypical it gets. If you like a good movie, you're on the right track.