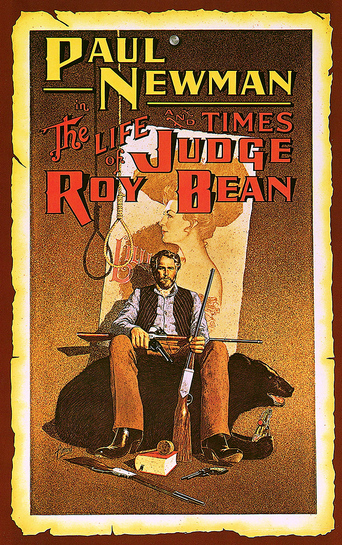 THE FILM:
In 1971, John Huston was feeling a little depressed. His last three films had failed both critically and financially, and his next project was a bleary boxing movie. He had met Paul Newman, and always wanted to make a film with him, but had never found the opportunity. A script by John Milius, based on the true story of a western legend, gave him the opportunity. A oddball western was bound to find some financial difficulties, but Newman's star power was enough for the film to get made.

The shoot was very relaxing, and Huston had a great time with Newman. However, on release the film underperformed, as a western wasn't exactly the most popular kind of film at the time of release, and the film faded into semi-obscurity. Today, the film isn't held in high regard, it has a 6.9 on IMDb, and a 72% on Rotten Tomatoes. It isn't hated, but it isn't loved. Which is really too sad, as it is a great film.

THE PLOT:
Roy Bean, a notorious outlaw rides into a small town in west Texas, where the arm of the law does not reach. After he is beaten and robbed, Roy Bean retrieves his gun with the help of Maria Elena, a local who takes a liking to Bean. He then proceeds to shoot everyone, and take control of the town. When a local preacher stops by, Bean decides he is now a Judge, and they bury the dead men. Then Bean sets up a courthouse and hires a couple deputies, where he transforms the dusty town into a fully functioning town.

Bean names the town Langtry, after the object of his dreams, eastern stage actress Lillie Langtry. Then one day, a man named Gass comes by, and asserts that he owns the land Bean is ruling over. Bean proceeds to put him in a cage with a bear and have Gass feed the bear beer. Bean decides to let Gass live, but this action has it's consequences. Gass begins to undermine Bean using the local female populace, and soon Bean finds himself in a tough spot. 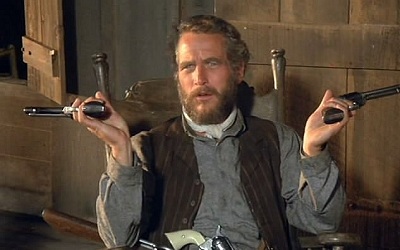 THE CRITICISM:
I'll make one thing clear, this is a strange film. It is eccentrically comedic in the first half, and very dramatic in the second. I know little about the real Judge Roy Bean, but I doubt his life was as strange as this film. In the paragraph, I made the plot sound almost like a thriller, which it definitely isn't. So what is it then? I truthfully have no idea. This film should not work, the comedic first half becomes dramatic in the second, and the film's pace is all over the place.

It works though. Huston pulls a fast one on you, using the first half to get you to like the characters, and then making you root for them in the second. It's certainly strange, but the result is a flat out masterpiece. I don't mean masterpiece in the technical sense, the film has flaws. But somehow, I was completely oblivious to them. Perhaps it was the performances. Paul Newman turns in some of his best work ever as Roy Bean. The character sparkles with wit and determination. He makes you like this man so much that when the last twenty minutes come up, you are firmly on his side.

He plays against type, but Newman does it with ease. It's an excellent performance. In supporting roles, Anthony Perkins, in his one scene as a priest is absolutely wonderful. His character is such a contrast to his role in Psycho, that soon that comparison leaves your mind as quickly as it came to it. There is a scene when he is talking to Newman about where to put a woman he wants to live with. Perkins uses the Bible to keep her from hearing what he is saying. I don't know why, but I found it hilarious.

Also good is Victoria Principal. She doesn't match Newman, but she is still quite good. Ned Beatty turns in a good performance, to be fair he doesn't have much to do. John Huston and Stacey Keach both have one scene, and they make they best of it, turning in great comedic performances. Roddy McDowall plays the villain Frank Gass, and does it with ease. Jacqueline Bisset isn't as good as she was in Under the Volcano, but she was still good here.

Finally, as the coveted Lillie Langtrey, Ava Gardener turns in a virtuoso performance. To be fair, she is only in one scene, but the build up she gets is off the charts, and she matches it deftly. You can tell Huston picked Gardener himself, he wrote her debut film The Killers in 1946. As the aging Langtry, she is perfect for the role. And she doesn't disappoint.

The screenplay by John Milius is excellent, as it somehow manages to balance the eccentric first half with the more dramatic second. The score by Maurice Jarre is a big highlight, especially for me. I've always found that Huston has a lot of scores in his films that, for lack of a better word, are really quite awful. However, here the score is just excellent and the song that was written for the film also fits in well. The sets are beautiful and capture the legend of the west well.

The cinematography is terrific, and the scene where Newman and Principal take a walk at sunset is almost as beautiful as anything in Days of Heaven. I found the films tone to be quite satirical. The film is an unabashed western, and it doesn't mind exploiting all the typical traits of the genre for comedic purposes. There are no gunfights, but there is a set up to one, and it fails hilariously. 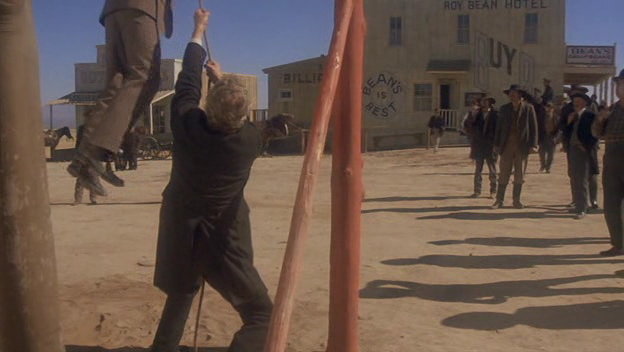 The direction by Huston sparkles with wit and humanity. By that I mean that despite all that occurs by the end you feel quite good indeed. I have often criticized him for being too laid back, but here the exact opposite occurs. The direction feels laid back, but in the way of a master cruising towards something he knows he'll achieve. However, that's not to say the film doesn't have flaws.It goes on for a little too long, Newman's obsession with Lillie Langtry is never explained and the character of Gass seems a little too patient.

However if you are willing to overlook these flaws, as I was, you'll be in for a fun ride, straight through to the end.

Email ThisBlogThis!Share to TwitterShare to FacebookShare to Pinterest
Labels: ava gardner, John huston, paul newman, set in the past, western