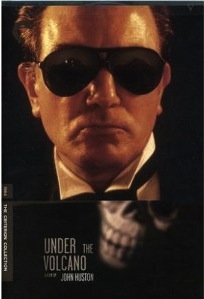 THE FILM:
Under the Volcano is a kind of Don Quixote for filmmakers, that is until 1984. By that I mean, multiple filmmaker's have tried to adapt Malcolm Lowry's 1947 novel, including Ken Russell, Luis Bunuel and Jules Dassin. The novels complicated prose and structure helped all of those ventures collapse. That is until John Huston tried it. He had at least as twelve drafts written, but the novel had proven its legend to be true.

That is, until he had a brainstorm. He thought of the technique he would later use on The Dead. Film it straight, cut the fat, do it literally. The script was written, and Huston headed to Mexico for the third time, to make this film. He had originally wanted to cast Richard Burton as the central character, but Burton was occupied on stage at the time. Huston then turned to Albert Finney, whom he'd worked with on Annie to play the lead.

The shoot was uneventful, and when released reviews were generally kind. The film never made much of an impact, which is odd considering it's source material. This was to be Huston's third last film.

THE PLOT:
Geoffrey Firmin, alcoholic ex-British consul to Mexico, is drunk on the day of the dead in Cuevernica Mexico. His wife has left him, his brother is in Mexico City, and he is lonely. He attends a party, where he gives a drunk nonsensical speech, before going to a bar to drink. It is then that his ex-wife arrives, she misses him, and he misses her.

He invites her back into their home, where they talk, and Geoffrey drinks. His wife, Yvonne, goes to take a bath, and Geoffrey goes off in search of liquor. His brother Hugh arrives and sees Yvonne, he is surprised to see her. Geoffrey comes back, and asks his wife and brother to come with him to see the sights. Geoffrey constantly interrupts their trip with drinking. Eventually, Geoffrey goes on an alcoholic rampage, and Hugh and Yvonne look for him, as night falls on the day of the dead.... 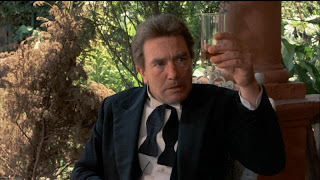 The entirety of the film rests on one thing, the performance by Albert Finney. Since Huston's shooting method is to utilize no tricky camera positions, or flashbacks, Finney's performance has to knock it out of the park in order to sell this story. And it does. In the history of film, the character of the drunk has always been an interesting one. Overplay it, and it can seem comedic, underplay it and it can seem non-existent. To strike the perfect balance is hard, and with little nifty camera tricks out of the question, the film rests on the actor's performance.

It is generally accepted that the three great dramatic drunk male performances were portrayed by Ray Milland in The Lost Weekend, Nicolas Cage in Leaving Las Vegas, and Jack Lemmon in Days Of Wine and Roses. No offense to any to the above, but Finney blows it out of the water. His Geoffrey Firmin is a force of nature. He is so incredibly into character, that halfway through the film I was not thinking in terms of Albert Finney, but in terms of Geoffrey Firmin.

He delves into the depths of a character that really isn't that likeable, and he doesn't try to make him likeable. He plays it like a real drunkard. When he meets a British man after lying on the road, he gets up and begins to mock the man. The man doesn't know of course, but we do. Finney's drunkenness is done to the tee. When Firmin runs out of alcohol he plows through his typical hiding spots in a rage, until moving into teh backyard, where he find his bottle. It's a bravura performance.

However, Finney is not the only actor who gives a great performance. Jacqueline Bisset, playing Firmin's long suffering wife, gives a wonderful performance. She still loves him, after all of those years, and she thinks she can help him, not knowing he is beyond help. Bisset was quite good in Day For Night, but here she gives a better performance. It's great. The same, however, cannot be said for Anthony Andrews as Hugh Firmin.

To be fair, Andrews isn't given the same opportunities as Finney and Bisset, but his character is kind of bland, so it is hard to create a great character out of this. As Huston lived in Mexico, he certainly knew his surroundings, and the cinematographer strikes a great balance between Firmin's surroundings and his drunkenness.

I do not like the score, although many people do. I find it sounds almost comedic at points, certainly the wrong kind of atmosphere for this kind of film. The screenplay does a great job of condensing an "unfilmable" novel into a film. Huston's direction is laid back, he lets the story take its course, and lets the actors do their thing. I know why Huston would choose to film in such an uninspiring way, but I do wish he could have made his camera just a little more involved. 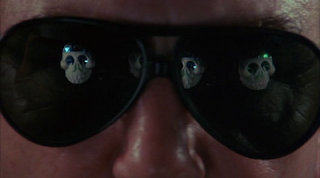 You can tell he is in control of his film, but it could have been shot in a more involving way. This brings me to my main issue with the film. It is just kind of boring. It moves along at a slow pace, and with characters that are unlikable. This makes it very hard to get into the film. No offense to Huston (or books), the film seems so literary. It never really becomes a film, it feels like an adaptation, all the way down the line.

To be fair, that is Huston's style, but I can usually overlook it, most time I don't even realize it, if the plot is interesting. Here the film feels like a showcase for Finney's amazing performance, with the plot being pushed to the side, much as the novel must have been, with Lowry's thoughts instead of Finney's performance. Overall, this is not a bad film. The performances by the two leads are terrific, and it is a fitting third last film for Huston.

Under the Volcano,
1984,
Starring: Albert Finney,  Jacqueline Bisset and Anthony Andrews,
Directed by John Huston,
7/10 (B)

Email ThisBlogThis!Share to TwitterShare to FacebookShare to Pinterest
Labels: alcoholism, John huston, sad, set in the past