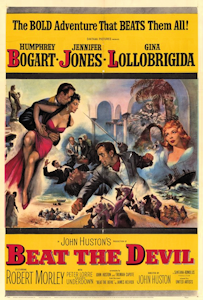 THE FILM:
In 1953, Humphrey Bogart was looking to make a film out of the novel Beat the Devil. His wished for his longtime collaborator John Huston to direct the film, but Huston was involved in post-production on his film Moulin Rouge, and was committed to making another film with Katherine Hepburn. Bogart was then forced to go with two-time collaborator Nicolas Ray. However, before the cameras could start rolling, Huston manged to fit the film into his schedule.

The shoot was eventful, shooting on the Amalfi coast in Italy. The script was constantly being rewritten, often the night before shooting, by Huston and Truman Capote. Bogart was involved in a nasty car accident, and his speech ability was made limited. In post-production in England, Huston hired a skilled mimic to dub some of Bogart's lines. His name was Peter Sellers. Beat the Devil would be the last film Huston and Bogart would make together, as Bogart died in 1957.

THE PLOT:
Billy Dannreuther and his wife Maria are in Italy, planning to take a steamer to Africa, with four conniving criminals. They plan to buy land in Africa rich with uranium to exploit, and get rich off of it. When Billy wakes up one day, he finds that a man who had helped them with the plan was mysteriously killed in London. Going downstairs, he meets future fellow passengers, the Chelms; Gwendolen and Harry. Harry seems to be a stuffy Englishman, but his smart, attractive, blond wife is taken with Billy, and he invites them to dinner.

They arrive at the restaurant a confused sort. Gwendolen is smitten with Billy, while Harry doesn't care much for him. On the other hand, Harry is smitten by Billy's seductive wife, Maria. Their steamer is delayed constantly, by a malfunctioning oil tank and a drunk captain. When Billy and one of his four acquaintances watch their car fall over a cliff, they are presumed dead, and one of the criminals lets Harry in on the secret, and Gwendolen confesses her love for Billy. 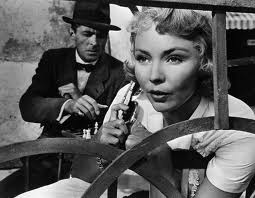 When Billy and his acquaintance arrive back, everyone is confused, and then they get the call to board the steamer. It only gets more confusing, so I'll save you the trouble.

THE CRITICISM:
When I finished Wise Blood, another Huston film, I was terribly perplexed. On one hand it was a very interesting film,  on the other it left me cold, and confused. I didn't know how to review it, properly at least. I promised myself that if I ever came across a similarly perplexing film, I would think for a while before I wrote a review. When I first heard of this film, I immediately thought I would come across a similar situation. I mean, come on, have you heard the plot! Critically, it is also divisive.

Roger Ebert placed it upon his Great Movies list, a list of the best films of all time, yet it has a 6.6 on IMDb. I was worried I would be overly confused by the plot and turned off by its craziness. What a surprise I found when I finished watching the film, and had  a review already planned in my head.

This film has been called a satire, but a satire of what? I cannot classify this as a satire, so what is it? The answer is very simple, it is an adventure film. I found myself laughing at many points, although it is not a comedy. It is certainly an odd film, yet it is entertaining to say the least and the tricky twists and turns of the plot are actually quite easy to follow.

It seems like the whole cast is having a ball, with Bogart turning in the kind of cynical performance he is the master of. Jennifer Jones is blonde, and loving it. I haven't seen many films with her, so I can't quite judge her quality as an actress, but she is excellent as the devious Gwendolen Chelm. The typical English exterior is betrayed, as she reveals herself to be a scheming little devil with a voracious appetite, for love out side of her marriage.

Peter Lorre, Robert Morely and Edward Underdown are all also excellent. The odd man, or should I say woman, out is Gina Lollobrigida. Her role as Bogart's young, sensuous Italian wife is certainly fine, but she seems to be in the wrong film. This may not be her fault, as it seems as if no one on this movie knew what they were going for. Her performance is a bit one note, which is never good, even in a adventurous romp like this film. To be fair she is never really given any stand out scenes. 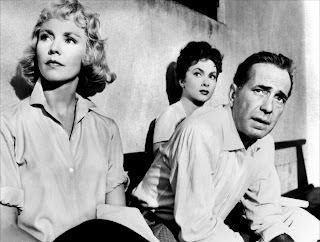 The screenplay seems incredibly muddled, yet it works in a very strange way. It seems that even working nights wasn't enough to stop Truman Capote from putting his own spin on the proceedings, and the dialogue is one of the films strengths. Capote and Huston manage to keep the screenplay tight and lean, but some scenes could have been cut, and some are just unnecessary.

This film can be found in the Public Domain, so the transfer isn't of the best quality. The cinematography is fair, but nothing truly stands out. The same can be said of the score, it works, but you don't find yourself humming it later on. The locations are beautiful and they work well for this type of story.

Huston's direction reflects the tone of the story, relaxed, smooth and in control. It flows naturally, showing that Huston wasn't afraid to take it easy, while still remaining in command of his film.

Overall, is it amazing? No, not really. Is it entertaining enough to serve as an enjoyable experience for 90 minutes? Yes, of course. It isn't thought-provoking. It isn't deeply psychological. It is entertaining, fast paced and likeable. So yes, it's not bad.