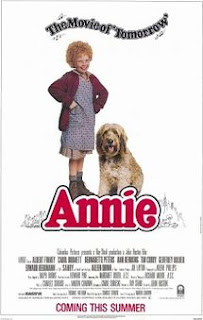 THE FILM:
In 1981, John Huston was strapped for cash. He needed a job, no matter what it was. He found one in the form of Annie. Annie was a hugely successful Broadway musical, based off of a 30's comic strip, that Columbia Pictures paid a fortune to acquire. Huston was originally repelled by the story, but he was forced to do it because of his lack of cash. There was a long period of trying to find someone to play Annie, and it took two years before they settled on Aileen Quinn, a spunky 10 year old from Pennsylvania.

In other roles, Albert Finney was asked to shave his head in order to be in the film. The making of the film was boring for Huston, and he had little interest in the final product. In the end, the film was to be one of Huston's most successful pictures, and it gave him enough credit to make his final three films.

THE PLOT:
Little Orphan Annie is a spunky redhead living under the ruthless rule of Ms. Hannigan, who runs the orphanage she lives in. She and the other orphans are forced to toil endlessly under their drunk headmistress. One day, Annie escapes from the orphanage in a laundry basket and meets Sandy, a dog. She and Sandy are caught by the police and returned to the orphanage, where Ms. Hannigan locks them in a closet.

Then, Ms. Farrell shows up on the orphanage doorsteps. She is the billionaire Oliver Warbucks's personal secretary, and they are looking for an orphan to take care of for a week, as a publicity stunt. She sees Annie and is immediately smitten and manages to wrestle her from Ms. Hannigan's control. She brings her to Warbucks's mansion, where the staff falls in love with her. When Warbucks arrives, he isn't too pleased, but he lets her stay. Then when Annie and Sandy stop an assassination attempt on Warbucks, he begins to slowly give in to her charm. 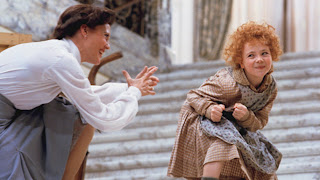 If what I've written above seems to be gushing with cuteness, imagine it with singing. Yep, this film is very, very cute. But it can get very, very annoying. There is a scene where Annie and Franklin Roosevelt sing to each other. I'm not kidding, that actually happens. To be fair, it could have worked, but only with a director who actually cared about the film. Huston did not. A cute children's musical was the exact opposite of the kind of film's Huston enjoyed to make.

Despite the lively musical numbers, only one song is catchy enough to be memorable, "Tomorrow". The rest are rather forgettable, for example there is a song called "You're Not Fully Dressed Without a Smile." Yep, I'm not kidding. As a musical, the film seems slightly half baked. The dance numbers are well choreographed, but that's about it.

As "Daddy" Warbucks, Albert Finney is pretty good and bald. It's really disconcerting. His head looks like an egg shell. As for his performance, it is a caricature, as most of the performances are. He is good, but it isn't his fault, the character is written like that. Carol Burnett goes way over the top, in a performance that is probably the best in the film. She even has a few funny moments, but a lot of the time her lonely Ms. Hannigan comes off as really creepy, or as a pathetic alcoholic.

Ann Reinking is okay as Ms. Farrell, but her character is rather one note. She does have a good voice though. Tim Curry and Bernadette Peters as a pair of bumbling con men are good, but not great as they too are rather one note. Finally, Aileen Quinn as Annie is very spunky, and lovable, but she overdoes it sometimes, especially when saying "grown up" dialogue.

The screenplay isn't that bad, but it does feel rather wooden. It could have been done much better, as most of the musical could have been. When you have a story this well-worn, it helps to spice it up a little, maybe with interesting direction or a different approach. As it is, the cinematographer shoots it in a rather boring, uninteresting way. It feels very stagey, it comes off as rather boring. To be fair, it can be quite enjoyable at times, but at other times it can be too much, or too little.

The film seems to rely on Annie's charm and cuteness in order to make you root for her. To be fair, she is cute, but it can be overbearing at times. The scenes in the orphanage are not bad, but some of the other orphan's can be really annoying. There is one actress who kept saying "oh my goodness" in such an annoying way, it made me burst out laughing each time. The film also goes on for way too long, but it could have been worse I guess. 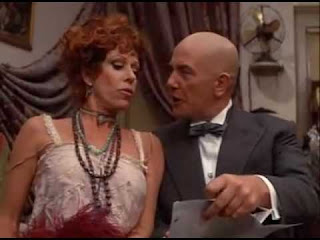 Huston's direction is not that good, you can tell it was a money job. His camera seems uninterested, and it drifts through the scenes as if it didn't really want to be there. I have often accused Huston of being laid back, but here he could have been sleeping and it wouldn't make the film worse. To be fair, Huston did have emphysema and would die within five years, but he still could have done a better job.

Overall, the film isn't that bad. It can be enjoyable at times, but it could have been much better. If you are looking for a childish musical, this will do. But still, you could do better.