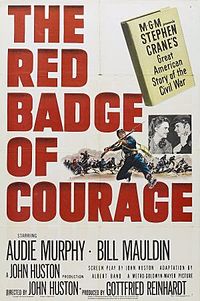 In 1950, John Huston happened to read Stephan Crane's famous Civil War novel, The Red Badge Of Courage. He immediately thought it would make a great movie, and brought it to Louis B. Mayor, head of M.G.M. Mayer rejected it on the grounds that it was not commercial, there were no female leads and therefore no love interests (a problem Huston would encounter again when making Moby Dick). However Huston persisted, and this resulted in a bitter power struggle at the studio.

In the end the film was made, but only after Mayer was removed as head of studio. The film was made using mainly unknown actors, including Audie Murphy, the most decorated war hero in American history. It was completed and Huston himself called it his greatest film. He left to Africa shortly after to make The African Queen. However, while Huston was abroad, the studio premiered the film in front of a test audience. They hated it, and the picture was soon in jeopardy.

As Huston was abroad, and the producer was the lone voice that spoke for the film. The studio mercilessly gutted the film, stripping it bare. The running time was slashed in half, and Huston's film was released halfheartedly and forgotten. Huston and Murphy both tried to buy the rights, but the studio said no, and the full version has never been released.

Which is really quite sad, as the film could have very well been Huston's masterpiece.

THE PLOT:
A young Union soldier in the Civil War is getting tired of endless drilling. Finally he gets his wish, as their regiment is told that they are to be shipped out to battle soon. However, the news troubles him. He is afraid that during the fighting he will become scared and run away. He shares his fears with his cocky comrades, but they do little to quell his ever increasing doubts. Finally the next day comes when they all leave for teh battle field.

As they march towards their destiny, the young soldier sees multiple bodies. He finally gets to the battle field, and he doesn't lose his cool during their first skirmish, but when the second wave comes he loses it and runs. Feeling guilty and saddened, he wanders throughout the forest aimlessly, witnessing first hand the gruesome truth of war. 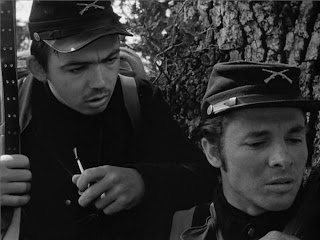 This film would have been absolutely amazing. If it was it's original length. When I finished the film, I was fuming. Not because I didn't like the film,  but because it was a butchered masterpiece. The studio mercilessly slaughtered the film, with no thought to it's creative integrity. The film lost so much continuity, that they had someone read quotes from the book to maintain some kind of balance. It makes it hard to review this film, not for what is there, but for what could have been. Perhaps someday someone will take control of the film and restore it to greatness (ahem, Criterion).

As it is, I'll focus on reviewing the film as it is. Simply speaking it is one of the best civil war movies of all time. The battle scenes are taught and suspenseful, the acting is top notch and the direction may be some of Huston's best. For starters, Audie Murphy gives a genius performance as the Young Soldier. Having been a war hero himself, Murphy completely immerses himself in the film, and the result is genius. In the earlier parts of the film, his vulnerability is outstanding, and in the later parts of  the film when he rages across a bloody battlefield, the fierce determination in his eyes is stunning.

By casting unknowns, Huston allowed his film to be not distracted by star-power, and relying on performance only. As the Loud Soldier, Bill Mauldin displays the same vulnerability as Murphy, only on the outside, rather than in a contained fury like Murphy. All the actors give a great semblance of realism to the film, something quite striking for a film of the period. I wish to bring up one scene at this moment, the scene in which the Young Soldier meets an older comrade, who is wounded and dying. The scene where he dies is so aesthetically different from the rest of Huston's oeuvre that I found it hard to believe this film was  made by the same man who would later make something so tonally different as The African Queen.

I have not read the novel by Stephen Crane (though I probably should), but from what I've seen I can see why the novel is famous. The screenplay, or what's left of it, is brilliant, and manages to be simplistic while still invigorating. The quality of the version I saw was not the best, but I saw enough of the film to be able to say that the cinematography is amazing. The black and white images contrast the bloodshed in the foreground against the clear gray sky in the background. This sharp, crisp, realistic images are incredibly detailed, especially for the period.

The way the film is shot reminds me of some period war films, and as Huston shot three I can see where the inspiration came from. The battle scenes are, as I said above, simply amazing. They show a brutal reality that few war films dare to attempt. The brutal combat, with an enemy that is never fully shown. Men die right next to you, and yet you carry on, oblivious to why you're fighting, and what you're fighting for. All of this against the clear American sky. It's not hard to see why the film bombed at the box office; it cut to close to the bone. 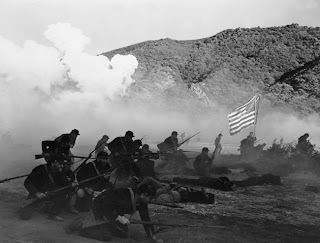 The score is good, but it can become a bit over the top at times. However, the scenes using traditional music fits perfectly and only enhances the films attitude. This brings me to Huston's direction. Despite my constant criticism's that Huston is lazy, and that he doesn't spend much time on his film's outcome, I have to say that here I am proven incorrect. Huston obviously cared for this film, and he knew it would be special. His meticulous craftsmanship is most easily noticed during the battle scenes.

They resonate with a power no "lazy" director could accomplish. Despite the choppy nature of the 69 minute cut, Huston's calm direction is a constant guiding line throughout. No studio could fumble badly enough to lose the spark that the film contains. This brings me to my problem with the film. It feels incomplete, as if someone took scissors and cut out a bunch of random parts. To make matters worse, the opening narration explaining who Stephen Crane is seems like an attempt to elongate the film.

The running narration throughout is exasperating, as at many points the narrator will interrupt the flow of the film to quote Stephen Crane, while saying something that does absolutely nothing to help the viewer. This is distracting, and with the fact that the film is only 69 minutes makes the film end way too early, and you are left feeling shortchanged.

Overall, this film could have been amazing. As it is, it is only great. It is my hope that someday a restored version will be released, similar to Metropolis. However, as it stands, this is still one of Huston's best, no matter how many people tamper with it.

Email ThisBlogThis!Share to TwitterShare to FacebookShare to Pinterest
Labels: John huston, sad, set in the past, simple, war