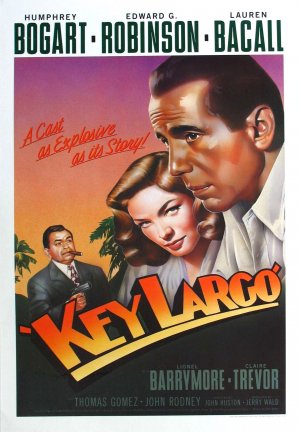 THE FILM:
After World War II, John Huston was eager to get back into the business. After The Treasure of the Sierra Madre, Huston came upon Maxwell Anderson's play Key Largo. He decided to do it, but only after completely rewriting the entire play. After completing the script, he went to the studio and, contrasting with Sierra Madre, he shot it entirely within the studio.  The film featured a cast of Hollywood heavyweights, including Humphrey Bogart, Edward G. Robinson and Lionel Barrymore.

Despite the fact that it was well received, the film has faded into relative obscurity. It won an Oscar for Claire Trevor, but that was the extent of it's awards. This is really quite sad, as it is excellent.

THE PLOT:
Ex-Army Major Frank McCloud travels down to Key Largo, in order to pay his respects to the family of one of his fallen comrades. When he gets there, the hotel they run is being inhabited by city men of the shady kind. He gets a drink from a woman at the bar, and then goes out to meet the family. At the same time, the hotel receives a storm warning, a hurricane is on the way. They shut up the hotel, and then it is revealed that the shady men are working for Johnny Rocco.

Rocco was a Prohibition era gangster, and he is in Key Largo to collect a payment. As the hurricane comes and the characters are all trapped under the same roof, danger ensues. 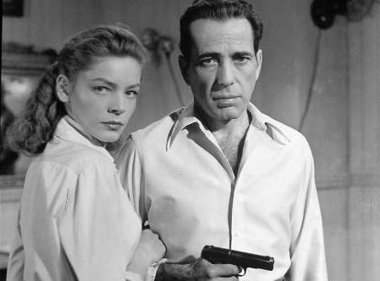 If Hollywood was good for one thing in the 1940s, it was making films like this. This kind of adventure film speaks to the masses, while still managing to entertain. This was the kind of action film you got back then, except less action and more buildup and talking. This is the kind of film they don't make anymore, and the kind I wish they did. A film like this doesn't need a good director, or a good plot, just good actors and great dialogue. This film has all of the above.

The acting is consistently excellent. Humphrey Bogart plays his typical stoic hero, but that's okay because the part never gets old. Lauren Bacall does good work as the widow of Bogart's old army buddy, but her part is the most cliched and uninteresting. Still, she holds her own against the rest of the cast. Lionel Barrymore is also quite good, a contrast to his despicable character in It's A Wonderful Life the year before.

However the two standouts among the cast are Edward G. Robinson and Claire Trevor. Robinson gives a performance that acts like a swansong to the gangster characters he cut his teeth on in the 1930s. He is crass, rude and evil, yet he has a bit of heart. You don't cheer for him, but you do feel sorry for him. However the pity you feel towards Robinson is nothing compared to that of which you feel towards Claire Trevor.

While Trevor mainly stays in the background for the film, she does come out in one terrific scene that definitely justifies her Oscar win. In the scene, she sings one of her old songs so that Robinson will give her a drink. Trevor makes the best of the scene and her rendition is pitiful. Robinson won't give her the drink, but Bogart gives it to her anyways. It's one of the film's best scenes.

While the performances are quite good, they wouldn't work if it were not for the great dialogue by Huston and Richard Brooks. While not endlessly quotable like Casablanca, their writing does give the story it's edge, and it works perfectly, although there is one line that comes out of nowhere that doesn't quite fit. The last scene, borrowed from To Have and Have Not, is a thrilling end to the story, and although it may be called cheesy by some, I believe that it was the perfect way to end such a film.

The cinematography is rather simple, but for a stage bound film like this, it is perfectly adequate.  The score is unmemorable, or maybe there was no score. If there was it was too boring to remember. The hurricane scenes are surprisingly well done, and the sets are well built and convinces. For a studio production, it sure tries hard to make it look realistic. 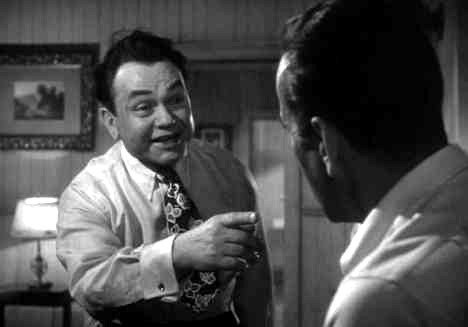 Now to Huston's direction. While this story really carries no directorial trademark, it is still very well done and thrilling. Huston keeps an iron grip over the story, and though his direction is lax, it still accomplishes what it needs to.

Overall, I found this film to be a nifty little thriller. It is very entertaining and still contains enough to think about afterwards. Definitely one I'd watch again.