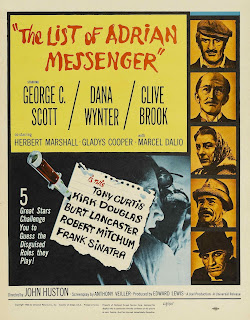 THE FILM:
Having just completed the exhausting film that was to become Freud, John Huston set his sights on a new project, The List of Adrian Messenger. The script had been written by Tony Veiller, whom Huston had worked with before. It was a little thriller, set mostly on an estate in Ireland, a favourite place of Huston's. It also involved a climax taking place during a foxhunt, one of Huston's favourite activities. It also seemed like the kind of slight thriller he could make quickly and with little expense.

He cast the American George C. Scott as the British Anthony Gethryn, the film's lead. As a marketing gimmick, he cast many famous actors in cameo, under heavy disguise. At the end of the film, each actor reveals themselves. The film was made quickly, and cheaply. It didn't set the box office on fire, however, and by then Huston was in Mexico shooting The Night Of The Iguana. Today, the film is barely remembered, and when it is, it is often the central gimmick remembered, not the film itself.

THE PLOT:
Anthony Gethryn is enjoying a weekend in the country with an old flame, Lady Jocelyn, and her cousin Adrian Messenger. Then, after a foxhunt, Anthony is pulled aside by Adrian, and Adrian gives him a list of names. He tells Anthony to look into their names, but doesn't give any reason why. Adrian then leaves for America, but en route his airplane explodes, and he dies. Anthony begins to look into the names, before realizing that most of them are dead. 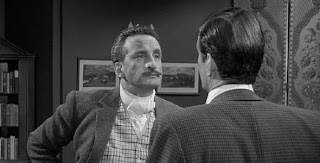 In order to make a good thriller, one must have three components. A plot that contains an amount of mystery, a lead with whom you can cheer for, and a feeling of palpable dread. The List of Adrian Messenger has none of the above. Does that make it a bad movie? No, but it certainly doesn't make it a good thriller. It appears to be Huston just sitting back and resting. Indeed, when I read the plot summary, I thought the premise was very good indeed. It sounded exactly like the stuff good thrillers were made of.

Of course, it wasn't. Huston wasn't nearly involved enough to give the film any edge whatsoever. The entire affair felt as if Huston was just going through the motions. Despite the outstanding cast, Tony Curtis, Burt Lancaster, Robert Mitchum, Kirk Douglas, Frank Sinatra, Dana Wynter, and George C. Scott, only Scott, Wynter and Douglas are on screen for any measure of time. In fact, most of the film rests on the shoulders of Scott.

George C. Scott is an outstanding actor, but here, despite the initial shock of "it's George C. Scott with a mustache!" he doesn't really do much with the character. The British accent is admirable, but even it soon wears thin (along with the mustache), and in fact his character is surprisingly dull. It doesn't help that he is given some really bad lines ("This is not the work of many men, but one man who is many men!"), but a veteran actor like Scott should have been able to flush out his performance.

Dana Wynter was perfectly suited to be furniture, and her performance is wooden as a board, but not because of her. It isn't fault that her character is perfectly useless. There is a connection between her and Scott's character mentioned, but it is dropped after a few lines. Jacques Roux, who plays Scott's sidekick also suffers from having nothing to do. The juiciest part of the film goes to Kirk Douglas, as the man who is many men, and he is good. The thing is, he isn't given enough time to show his evilness, and the film's lightweight tone doesn't help him either.

The celebrity cameos never elevate above gimmick, and the film doesn't showcase the cameos enough for the audience members to guess who is who. The script had promise, but under Huston's monotonous direction, the plot never really excites. In fact the film's tone is so light, one could mistake it for a satire, similar in tone to Beat the Devil. The first half really makes this seem as if it was actually what Huston wanted. However, when the second half begin, it is made clear that this is not a comedy, much to the film's detriment. 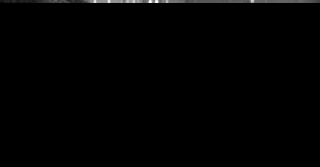 The makeup used to hide the celebrities is actually not half bad, but it makes the skin of the mask look very old, and plastic like. Still, it is convincing enough to hide many celebrities, and it makes for an interesting enough ending. The film's sets are really basic, and even the climax is kind of boring. The plane crash scene looks intensely amateurish, especially when compared to a similar scene in Hitchcock's Foreign Correspondent in 1940.

The cinematography is one note, and never becomes that interesting. The foxhunting scenes are the best shot scenes of the film, but the sport itself is rather confusing to me. Which brings me to the direction by Huston. Lax doesn't describe it. Anyone could have shot this film, and none of Huston's usual trademarks can be seen. It is a very boring exercise, only because no one seemed interested in the film, except Kirk Douglas. And even Douglas wasn't allowed to do much because Huston wasn't doing much.

In short, what could have been a great thriller falls short of it's target. It still manages to entertain, but not nearly as much as it could have.