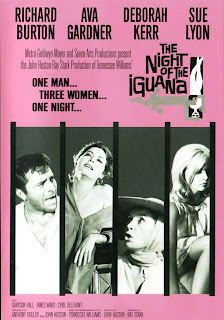 In the early 60s, Tennessee Williams's new play was a big hit on Broadway. This success got John Huston interested in the subject. The setting, Mexico, only excited him more. He bought the rights, and decided to shoot it. For the cast, he choose a group of veteran actors and one new hot prospect to flesh out the roles. The lead was to be played by Richard Burton, who had gathered quite an entourage by this point due to his affair with Elizabeth Taylor.

Huston thought that problems should be avoided at all cost, so he equipped all cast members with 6 guns, and 6 bullets with the names of all the other members of the cast on it. There were no problems during shooting. Williams's himself came down to Mexico during the shoot to watch over Huston's direction. In the end, the film was made quickly and efficiently. It grossed a healthy budget, and everyone walked off satisfied.

THE PLOT:
Reverend Shannon is a defrocked priest. He roams the wilderness of Mexico as a tour guide for a cheap bus company. He is a drunkard, and in his party he contains a bunch of baptist teachers from Texas. One girl in his party, Charlotte has a crush on Shannon. Her guardian is deeply suspicious, and Shannon tries to ward off her advances, but he is unsuccessful. He is caught, and when threatened by Charlotte's guardian the fear of losing his job becomes too much. He drives his party to an old hotel in the middle of the jungle, to meet Maxine, and old friend.

He keeps the tour group in the hotel until he can change their minds, and possibly save his job. At the same time, an old poet and his granddaughter also arrive in the hotel, and then day fades into night... 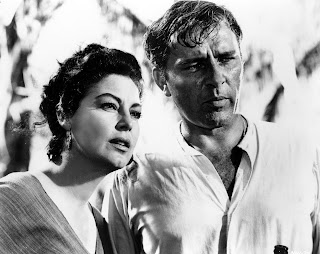 I do not like Tennessee Williams. I've seen A Streetcar Named Desire, Suddenly Last Summer and this film. While Streetcar is very overrated, it at least had great performances, and some kind of cohesive plot. Suddenly Last Summer is a plot less mess, and only Katherine Hepburn's performance made it bearable. However, this film is an exception. I genuinely enjoyed it, even on my second viewing.

The performance's are excellent, for the most part. Richard Burton gives his character a crazed energy that showcases exactly how good an actor he was. The material is putty in his hands, and he morphs it into a man whom could be deemed disgusting, and who becomes quite relatable. His character is pitiful yet entertaining at the same time, thanks to Burton's talent. Ava Gardener, whom one could deem as past her prime in this film, sparkles with a repressed sadness.

Gardner may have been popular in the 40s and 50s, but here she truly shows that she can act. Her Maxine is similar to Burton's character, she contains a repressed sadness that only bubbles out in the end. However, the true delight of the film for me was Deborah Kerr. I've always thought that Kerr was immensely talented, but here she shows exactly how talented. She never succumbs to being over the top, and dominating the film. Instead the exact opposite occurs. It is only later, when one reflects on the film that Kerr's true brilliance is revealed.

For example, there is one monologue that she gives that takes up about five minutes, but I never got bored. I did not because I kept watching Kerr's face and admiring her talent. it is only on re watching the film that I truly understand what drew me to Kerr's portrayal in the beginning. Sheer brilliance. Also excellent is Grayson Hall as the cloying chaperone, and Cyril Delevanti as the world's oldest poet. However, if there is a weak link in the cast, it is certainly Sue Lyon.

Fresh off her debut in Stanley Kubrick's Lolita, Lyon here does a lot of pouting. And flirting woodenly. Don't get me wrong, she certainly looks the part, but she doesn't act it well. Her line deliveries come off as flat, and uninteresting. She was good in Lolita, but perhaps it was the director that shaped her performance in that film. Here, she is the most boring character, instead of one of the most interesting. 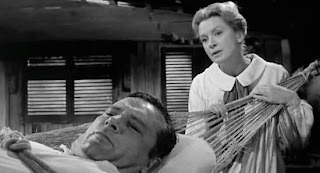 While I do not like Tennessee Williams as a writer, he could certainly write great parts for actors. He was also a quick thinker, apparently. In Huston's autobiography, he states that a scene in the film was coming off flat, and then Williams told him to have Burton knock over a glass bottle, and have him walk over. That little thing immensely helps the film.

The writing is good for the most part, but the story is kind of soapy. Still, if you go with the flow, the end result is quite entertaining. The cinematography is vibrant and although the film feels stagey in some parts, the cinematography elevates it from the stage, and into the jungle's of Mexico. The score is also quite good, especially for a Huston film.

Speaking of Huston, his direction here is vibrant and it feels alive. It feels as if he just recharged his batteries and came out of the gates running. To be fair, it does appear as if Huston directed the film in his normal style, but I can't help feeling entertained. His relaxed direction is confident and it works well. While Huston mainly directed novels, after this film, I'd love to see him do another play.

While, it may be outdated and stagey, this film is still incredibly entertaining and the cast is uniformly terrific.