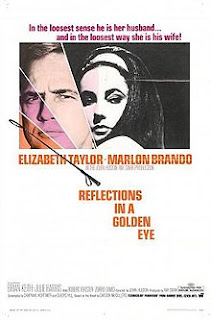 THE FILM:
Carson McCullers's novel Reflections In A Golden Eye had a tough time making it to the big screen. The main subject, homosexuality, was a big no no for studios during the 1940s, 50s and 60s. So when John Huston and Elizabeth Taylor struck out to make the film, they knew they were in for a tough time. Taylor's longtime friend, Montgomery Clift was initially set to play the lead, but he died before the script was finished. Taylor then set her eyes to Marlon Brando, and despite his initial resistance, he eventually took on the part.

Huston originally wanted McCullers to write the script, but her illness made that impossible. Huston and McCullers became friends, Huston even invited the ailing author to his Ireland home, soon before she died. Huston managed to get most of his original version onto the screen, but not everything, He originally planned to have the film tinted so it all became a muted gold colour. Unfortunately the tinting confused audiences, and it was pulled from theatres.

The film bombed on release, and faded into relative obscurity, despite the high profile stars on display. Today it held in rather low regard. It has a 6.8 on IMDb, and a 57% on Rotten Tomatoes (that qualifies as Rotten). Which I find hard to believe, as the film is actually quite good.

THE PLOT:
Major Penderton is a closeted homosexual living in a southern Army base. His wife, Leonora, is repressed and lashes out on him by having an affair with their neighbor, whose wife is mentally disturbed. One day, Penderton sees a young private, and he becomes infatuated with him. The same private becomes infatuated with Leonora, and begins to break into the Penderton house at night just to look at her. In the meantime, Lt. Colonel Langdon, the man whom Leonara is having an affair with, begins to grow worried with his wife.

Earlier she had an attack, and did something odd to herself with a pair of garden shears. Now, with her suspicion about her husband growing, she begins to get closer and closer to another attack. She and her manservant and confidant, Anacleto, begin  to make plans to leave. Meanwhile, Major Penderton's infatuation with the soldier becomes more and more intense, bringing them all towards the brink of madness...

THE CRITICISM:
I have never found Huston's films to show subtlety in any way, shape or form. So, when I heard he directed a film about a closeted homosexual, warning signs began to flare up all around me. I was worried that Huston would treat the subject tactlessly, and that perhaps Huston would show Penderton as a "bad" person for his sexuality. I did not think, however, who would be playing Penderton. Marlon Brando.

My fears, however, were not verified. Huston not only treats the subject with tact, he allows Brando to give one of his most interesting performances. By giving Brando most of the weight of the role, he allows Brando to not portray the character as an innocent, or a bad guy. His character finds the moral grey area, and jumps straight in. Brando portrays a man who is disgusted by his very core, but one whom cannot resist his primal urge. Also, he totally nailed the southern accent, and even added his own mumble in the mix, to really make the character stand out.

Marlon Brando was one of the best actors of all time, and his portrayal is absolutely excellent. That is not to say, however, that he was the only one who gave a good performance. Elizabeth Taylor's floozy wife, is the exact opposite of Brando's introverted character. She is extroverted, unabashed and she speaks her mind. She seems like the perfect party girl, yet her moral core is even worse than Brando's. She doesn't care who she hurts, just as long as she gets what she wants.

Taylor worked a long time to get the film made, and you can tell she was made for the part. Also excellent is the always underrated Julie Harris. She seems to be a heartbeat from collapse in each scene, yet she strings herself along. Brian Keith is very good, but his part is the most underwritten. Although he says barely nothing, Robert Forster as the object of Brando's desire is a mystery. Why does he break into the Penderton house just to go through Leonora's things? Why does he always ride his horse naked, at the exact same time each day?

This mystery propels the current of foreboding that weaves itself through the storyline. I suppose this film could technically be called a mystery, the opening of the film features a quote from the novel it is based on. The quote states that there was a murder in the south. But who was murdered, and who was the murderer? The writing manages to propel this undercurrent in a way that is admirable. The pace is slow, but not languid, and the last few scenes rack up the tension, even though you have no reason to feel tension.

Reflections in a Golden Eye has been called a mixture of camp and mystery. While I cannot deny that the film does not contain camp, it actually works for the film. The film does not create a world that feels realistic. Rather, in the tradition of many Southern Gothic films, it creates a fantasy world that feels detached from reality. The cinematography does nothing but help this effect. From the opening shot, the film feels like a dream. Golden hues trickle down from the sky, and it is clear that at least some of Huston's tinting made it through to the final print.

While this dreamy effect is nice at the beginning, it slowly becomes more and more sinister. By the end, the golden hue has been replaced by jagged lightning. The effect works well. The score, is yet another weak link. It has moments where it is good, but in others it sounds over the top for such a film. 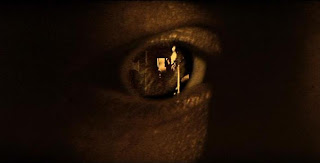 However, this does not mean the film is flawless. The price of originality is that it can become tiring at times, and this film is no exception. As well, the last shot is really cheesy, and it made me burst out laughing, when I probably shouldn't have. As well, the character Anacleto, Julie Harris's servant, is kind of annoying. Risking criticism,  he seems to be the other end of the spectrum from Brando, meaning flamboyant as opposed to introverted.

Going back to the good points, Huston's direction is quite good. Instead of smashing the audience with a blunt instrument, his film does contain subtlety. By the end, it feels like a sick joke. That is in fact quite good. There is a deep, black satire embedded deep in the film, and it only makes the film more interesting. Huston's use of colour is also striking, and the horseback scenes are thrilling. Despite the implied animal cruelty displayed near the middle of the film.

Overall this film, while flawed, is still one of Huston's most interesting films. Thanks to the great performances by Taylor and Brando, the film manages to not dumb down the issue of homosexuality, but also not to treat it in a negative light. Homosexuality is not what dooms Penderton, but in fact it is his inability to accept who he is that dooms him right from the start.