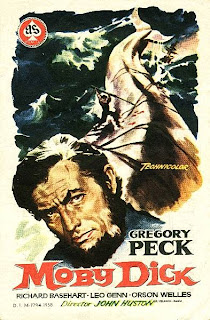 THE FILM:
One day, famed science fiction writer Ray Bradbury got a call out of the blue from John Huston. Huston asked Bradbury to help him write a film adaptation of Herman Melville's Moby Dick. Bradbury confessed that he had never managed to finish reading the book, but Huston handed him a copy and told him to read what he could. Then Bradbury headed over to Ireland with his wife to write. Even after the screenplay was completed, it took Huston two years before financing could be arranged.

Indeed the film lacked a female star, and was about a bunch of men hunting whales. As part of the film's financing arrangement, Huston was forced to cast a big name in the part of Captain Ahab. He chose Gregory Peck, who no one thought would work in the role, including Peck. The shoot was plagued by production issues and multiple "Moby Dick's" were lost. Indeed Peck almost drowned during a scene. On release the film made next to nothing, and critics were generally indifferent to the film. It has yet to make it's budget back.

THE PLOT:
Any English major could tell you the plot, Ishmael is a stranger who takes a need for the sea. He heads to the town of New Bedford, where he rooms for a night with a mysterious stranger with whom he later befriends, named Queequeg. Together they strike out on a whale-hunting voyage on the Pequod. The Pequod's captain, is the mysterious Captain Ahab whose leg was taken by the infamous white whale Moby Dick, and whose is rumored to have half a heart.

It is Ahab who clarifies the Pequod's  true mission. They are not to hunt whales, they are to hunt Moby Dick. 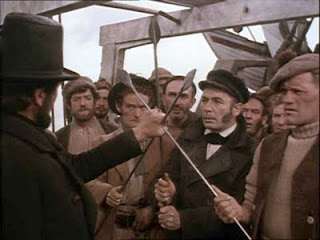 THE CRITICISM:
I have not read Moby Dick, although I have tried. The story was not as familiar to me as it is to many, so I will just clarify something. This is the definitive screen adaptation of Moby Dick. Huston gets everything right. Peck, who has been criticized as wooden in many things, is magnificent in this. His Ahab is an intensely foreboding portrait of evil. Richard Basehart may have been a little old, and his performance may be average, but he allows you to reflect your own feelings and opinion through the character of Ishmael.

I hope I do not alienate literary fans who dismiss this as an inadequate adaptation when I say that the film does a great job of condensing the story into an enjoyable film experience. Ahab has been corrupted by the whale, and he has lost more than his leg. He has lost his soul. This is brilliantly conveyed in the performance by Peck, his foreboding glance and scars make him visually scary, but I never found myself to be afraid of him. He most certainly is not 'wooden', the dialogue is old fashioned, and I am sure that part of it must have come from the novel.

Baseheart does good work, but we never really focus on his character. His character is the lens through which we observe the tragic story of Ahab. The film can feel like an ensemble in parts, and we get time to explore some of Ishmael's shipmates. However, in one of the best scenes in the film, Orson Welles delivers an absolutely sterling monologue containing a parable. Welles dominates in that one scene, although apparently he was so nervous before delivering the monologue, that Huston had to hide a bottle of Brandy on set for Welles to sip from during nervous spells. 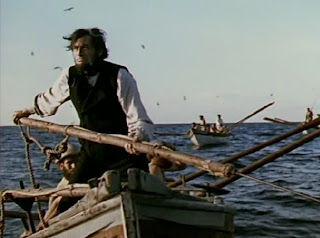 The screenplay is terrific, melancholy and dark, while containing a mysterious edge that Bradbury and Huston exploit terrifically. Credit must go to Melville's novel, for giving us a beautiful story. However it is the screenplay that condenses the novel without losing it's edge. For some reason I found the film to be slightly satirical, although it is certainly very darkly satiric if this is the case.

The cinematography is incredibly interesting. It looks and feels like no other Technicolor film. The colours are not garish as is the case with many films of that era. In fact, even the scenes at sea look like they are actually taking place at sea, and not in a tank or against some kind of backdrop. The film invokes a somber melancholy tone, through the muted pallet of colours. I have heard that the day for night (shooting in day, and darkening the image to make it look as if it takes place at night) technique was used, and it certainly makes sense.

Finally to the direction. Huston once again delivers a great film. While the direction may not be as energetic as Wise Blood, or relaxed like The Dead. His direction is key to the success of the film. It's a good thing he does well, admirably. The tone is slow, though not nearly as slow as the novel. It certainly feels that by the end someone is winking at you. that someone may very well be John Huston.

Email ThisBlogThis!Share to TwitterShare to FacebookShare to Pinterest
Labels: ireland, John huston, set in the past, simple, strange