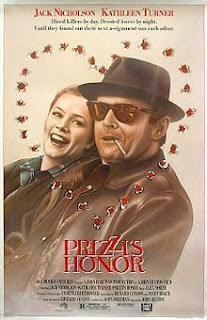 John Huston is in his late 70s. He isn't what you'd normally call hot stuff. Richard Condon wrote a book about the mob, it was a comedy. Condon decided he would make his story into a film, so he approached Huston, despite Huston not having made a comedy in some time. Huston went through an impressive roll call of names for the various parts, but he made his mind up in the end with Jack Nicholson playing Brooklyn mobster Charley and Kathleen Turner playing the seductive Irene.

Huston even cast his daughter Anjelica in the juicy part of Maerose. The film was not expected to perform well, but it became such a massive sleeper hit that when it came out on VHS, it was still in theatres. Critics loved it, and  it nabbed Huston his last Oscar nomination for Best Director, at the young age of 78, a record that stands even today. So it would make sense for this film to be regarded as a classic these days, right?

THE PLOT:
Charley Partanna is born into the mafia, so when he becomes of age he becomes a contract killer for the Prizzi's, one of the most famous of the New York mafia families. At a family wedding, he notices the beautiful Irene Walker. He is immediately smitten, but he loses her and can't find her. Afterwards he gets a call from her, she's in California and she wants to meet him. The next day Charley flies out and they fall immediately in love, and so does she. 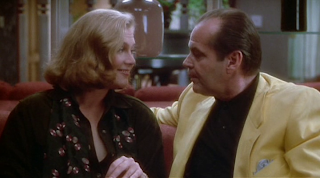 He flies back home bursting with happiness, and he gets an assignment. Someone stole money from the Prizzi's casino in Vegas, and they aren't happy. It was a husband and wife job, apparently and they are in California, so Charley flies back out. There he shoots the husband, and then waits for the wife to come home. The wife is Irene, and she gives him the money, only there is half of it missing. In doubt over weather to kill or kiss her, Charley flies back to New York (again), and consults his former fiancee, after they have sex on the carpet.

Charley decides to kiss her, and flies (seriously, they use the same airplane each time, it's really annoying) back to California and marries Irene. From there, the newlyweds go back to New York (guess the method of transportation) and begin to work on a new job. It turns out that Irene is a contract killer and she and Charley plan to kidnap a bank manager for ransom, only they are forced to shoot a cops wife, turns everyone against them, even each other.

THE CRITICISM:
I really wanted to like this movie, but I think you can tell by my annoyance over the constant air travel (seriously, it's like an ad for United) that I didn't love this film. I didn't hate it though, because Nicholson is just so entertaining while trying to pull off a Brooklyn accent, though it almost works. It is a black comedy, but I did not laugh once or cringe. I sat there and saw the movie.

Above, I wrote that this film has mostly been forgotten, and that is true. it was apparently a big hit in the 80s and I can see why. But it has been partially forgotten. Maybe because 1985 was such a weak year for film, this was regarded as good enough. Nicholson looks a little old, but he and Turner had sufficient box office appeal to pull it off. I had been told that this film was amazing and really bad. Personally I did not enjoy it, but it was entertaining enough.

With the performances, Nicholson is so completely over the top that his Charley Partanna almost works, the accent is enough to make me smile, but unfortunately for a two hour long film, a smile is not enough. Kathleen Turner certainly has an abundance of sex appeal, but I found Irene to be incredibly similar to Turner's work in the outstanding Body Heat. She had me confused about whether she was a hero or villain, up until the last few minutes I did not know. Some would sat this helped the performance, but I personally just found it confusing.

Anjelica Huston won an Oscar for her work as Maerose Prizzi, but like I said above, it must have been a weak year. Huston was good, but again I couldn't figure out weather she was good or evil. It just ended up confusing me. The rest of the cast does good work, but nothing jumps out. The cinematography can feel rather old school at some parts, but I guess that's just the way Huston interpreted the story. Alex North's score can feel clawing at some points, but the covers of popular Italian music can be entertaining. 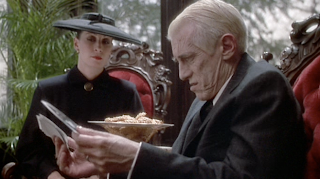 I felt as if the film was Huston taking a break. It certainly didn't feature any amazing shots or scenes, I cannot comprehend the film's multiple Oscar nominations, it seems to me like a really average film. That is not to say that it wasn't entertaining, Nicholson was enough to save the film from mediocrity. The end result is not the boring film it might have been without Nicholson's presence and Anjelica certainly injects life into her scenes, but in the end, despite the wicked satire of the plot the film never really goes anywhere you want it to and you are left feeling empty.

But I guess that's better than nothing.