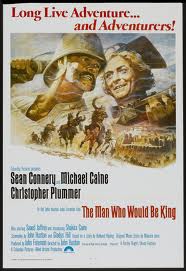 In the mid 1950's, John Huston picked up a copy of Rudyard Kipling's The Man Who Would Be King. Huston felt the story would make a great film. He approached both Humphrey Bogart and Clark Gable for the lead roles, and they accepted. Unfortunately, due to Bogart's death in 1957, the project stalled. Interest was regained during the making of The Misfits, when Clark Gable expressed his desire to do the film. Unfortunately, due to Gable's death in 1961, the film was once again shelved.

It would be brought up in conversation now and then, with names like Burt Lancaster and Kirk Douglas attached.  Nothing came of it, and the project was yet again shelved. Finally in 1973, during the making of The Mackintosh Man Huston approached Paul Newman about doing the film, with Robert Redford. Newman thought the film sounded excellent, but if the film was to be about British men, British actors should be cast. Newman mentioned Sean Connery and Michael Caine as possible leads.

Huston thought the idea excellent, and immediately contacted the two. Both agreed, and the shooting commenced in Morocco. It would be the last large scale epic Huston would ever tackle.

THE PLOT:
Rudyard Kipling is the author of a newspaper in Victorian era India, and one night as he types the next day's paper, a figure in rags approaches him. It comes with great shock to him when he realizes that this is a man he had befriended years prior. Indeed, it is Peachy Carnahan, whom Kipling had met when Peachy stole his watch. Carnahan begins to tell the story of his adventures, with fellow rogue Daniel Dravot.

Years earlier, they had the idea to walk to the mystical land of Kafiristan, where no man has been since Alexander. The idea was to make peace with the warring tribes, and set themselves up as kings. After many sidesteps, they reach their destination and kick their plan into action. After Dravot is hit with an arrow, blocked by an ammunition belt, the local populace think him a god. After a great coincidence, he becomes the ruler of the land, and people worship him.

Unfortunately, Dravot begins to think himself an actual god... 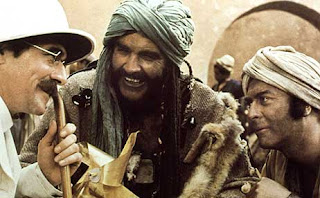 If ever the phrase "they don't make 'em like they used to" is applicable, this is a shining example. This kind of epic, big budget swashbuckling adventure is distinctly old Hollywood, but also incredibly entertaining. The film balances drama with comedy, adventure and greed, and does it flawlessly. This film hits all the right buttons, and then even more. Caine and Connery have tremendous camaraderie and their friendship is one of the most believable of all time.

Indeed, in their performances, they exude a remarkable charm and drama. Caine, as Peachy Carnahan is charming, dangerous and greedy, while the same can be said for Connery's Daniel Dravot. Those who know Connery only as James Bond will be in for a shock when they see this film. He proves that he can not only act, but act well. For those who know Caine as an old man, will be surprised to see that in his youth he was an excellent actor.

Christopher Plummer, in the role of Kipling is absolutely excellent. He is the lens through which you observe the story. The many years, and drafts of the screenplay, definitely show. All of that time in pre-production result in a perfectly realized script, and film. The score, by Maurice Jarre can be too much at points, but is still quite moving, especially in the last scene. The cinematography is beautiful, although it might feel slightly old school at points, so is the film.

Too many epics find that with a big budget, the film must be intense and brooding drama. As Huston realizes here, that is not the case at all. With a big budget, he manages to craft an excellent, drama that doesn't mind verging on the comic at points. This is but one of the many literary adaptations Huston would tackle throughout his long career. As is the case with almost all of those films, I have not read the source material. From my understanding Rudyard Kipling was an actual British writer, who at one point did live in India.

I am once again bring light on Huston's direction. He brings a masterful touch to the proceedings, crafting what could even be considered satirical by some. The film comes together through his direction, and indeed I cannot think of many directors whose range extends as far as Huston. If there was ever a running theme throughout his films, it is greed. This is no exception.

I considered putting this film as my number one Huston, but I couldn't bring myself to remove The Dead from that position, so at least for now, this film will have to be content with second place.

The Man Who Would Be King,
1975,
Starring: Michael Caine, Sean Connery and Christopher Plummer,
Directed by John Huston,
10/10 (A+)

Email ThisBlogThis!Share to TwitterShare to FacebookShare to Pinterest
Labels: enjoyable, greed, John huston, set in the past, simple