*I apologize for my extended absence, but I'm back now. So, take that positively I hope!* 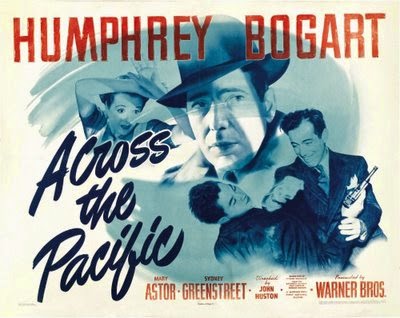 "MINE IS BIGGER THAN YOURS"

Yes, that may very well be a euphemism, but not one of my doing I can assure you. It comes from a scene in 1942's Across the Pacific where Humphrey Bogart is sizing up his revolver in comparison with Sydney Greenstreet's. I'll leave it to you to discover who's was bigger, but, needless to say, both men found it necessary to rely on their guns in the very near future.

This film was John Huston's second time working with Humphrey Bogart, after their highly successful prior pairing on The Maltese Falcon. It seems as if Warner Brothers wanted some more of that magic, because they brought back Mary Astor and Sydney Greenstreet along with Bogart and Huston (sadly, Peter Lorre could not make it to the reunion). In an oddly prophetic twist of fate, when the film was originally put into production it revolved around a Japanese attack on Pearl Harbor, which Humphrey Bogart was to thwart. Unfortunately, when the Japanese actually attacked Pearl Harbor, it necessitated a move of location to the Panama Canal (though, apparently, the title had no reason to be changed and remains absurd as they never get to the Pacific Ocean).

The war also had unintended consequences as it meant that, like so many other Americans of the period, John Huston was caught in a wave of patriotic duty and joined the army. Leaving halfway through shooting the film's climactic chase, Huston's replacement Vincent Sherman asked how Bogart could possibly escape such a situation, and Huston remarked something along the lines of "I have no idea, your problem now!" But what exactly does Humphrey Bogart have to do "Across the Pacific"? Well, the plot revolves around Bogart's character Rick Blaine, ah sorry, Rick Leland, being dishonorably discharged from the army. After a failed attempt to join the Canadian forces, the bitter Leland decides to offer his services to anyone who can may, and boards a steamer headed for the Orient.

On board he meets both the enigmatic Dr. Lorenz (Greenstreet) and the alluring Alberta Marlow (you'll never guess where she comes from. Wait for it... Alberta! Who saw that one coming?), played by Mary Astor. Leland naturally becomes enamored with the seductive Marlow, and they begin a romance. But yet, the Doctor begins to appear more and more like a Japanese sympathizer, climaxing in a scene where he offers Bogart money for secret navy information. Bogart is on the fence, and just as it looks like our intrepid hero might be crossing over to the dark side, it turns out he is an American spy! Can this one dashing hero save the Panama Canal from a nefarious Japanese attack? 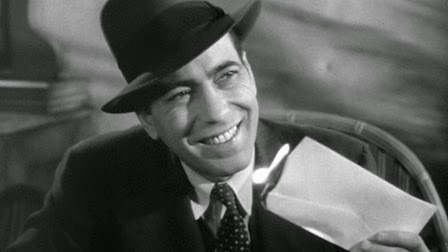 Well, I won't tell you that until you've seen it of course! There are two things that concerned me before watching this one. First: that it would be a simple generic patriotic action film and second: that there would be some offensive Japanese stereotypes included in the mix. On the first count, I was not wrong. In many ways, Across the Pacific is similar to Michael Powell and Emeric Pressburger's Contraband. Both films feature a dashing hero, a morally grey female love interest and a group of Axis sympathizers plotting an attack. Both are undoubtedly fun features, with some excellent dialogue and suspense in both, but they're really nothing special in the end.

On the second count, I was pleasantly surprised. There were only two lines in the film when I detected any outwards racism, and neither of them detracted from my opinion of the film much, other than me having to stifle a giggle over how ridiculous they sounded in the mouth of Bogart and Astor. For the most part, the Japanese are treated just as the Germans were in Contraband. Nefarious, evil, scheming bastards they may be, but it has very little to do with the colour of their skin. Such politics are refreshing in such an otherwise generic experience.

Another positive note I took from my viewing was the chemistry between Astor and Bogart. During The Maltese Falcon, there was always an icy edge to their banter. Here, it's a lot more playful, and the film is better for it. Both Astor and Bogart get to sneak in some simply beautifully constructed barbs at each other, and despite Astor's typical turn into the helpless female by the end, her integrity and singularity from the first two scenes is impeccably preserved.

Bogart too is in fine form. He has a tendency to phone in his performances sometimes, but here he's perfectly involved in the plot and it makes watching the film much easier because his commitment shines through to the viewer. Sydney Greenstreet's wonderful voice is well suited for the many scenes he shares with Bogart, and his last scene is actually rather tragic in a heart breaking way, which had Huston not been, well, fighting in a war, the camera may have captured in a more interesting way than the format Vincent Sherman had in mind. 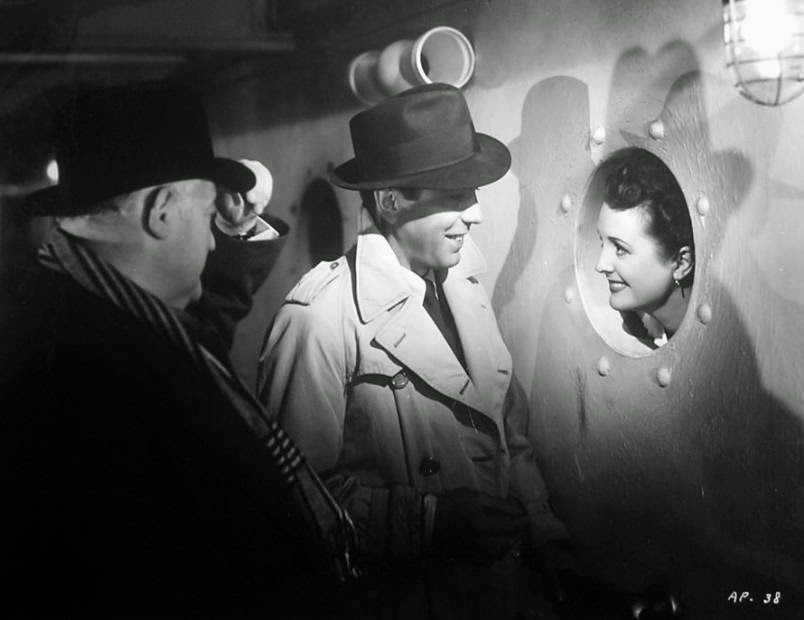 Sen Young is a bit annoying as a supporting passenger on the cruise only because most of his scenes involve breaking up Astor and Bogart, who are such a joy to watch on their own. Seeing Don Siegal's name in the credits is a bit of a surprise, but I suppose doing the "montage" (as he is credited for) must be as hard a job as any other. Speak of the devil, the editing is rather good in this film, and so are the "montages". Bogart's costume must have been reused for Casablanca because it looks exactly like the hat/suit/overcoat combination he wore in that film's famous climax. It also doesn't help that his character's name is Rick or that Alberta's (I seriously can't get over that) last name is Marlow. Foreshadowing Pearl Harbor is creepy enough, but foreshadowing both of Bogart's most famous future characters? That's just incredible.

The cinematography dips into the luscious world of shadows that black and white portrays so well. Many scenes, such as those at night, are fantastically photographed. And yet, even despite his departure, the film is well directed by Huston. His relaxed style is very helpful as it takes ones eye off the the filmmaking and onto the story which, although cliched and generic, is still interesting. You can tell he must have been having fun on set because, for the most part, the film flows so well. It's not his best work, but it seems like a great job in any case.

And that pretty much sums up Across the Pacific in a nutshell. It's fun, interesting and involving, but it's also generic, cliched and half baked. Take what you will from it, but at least it's a good ride.