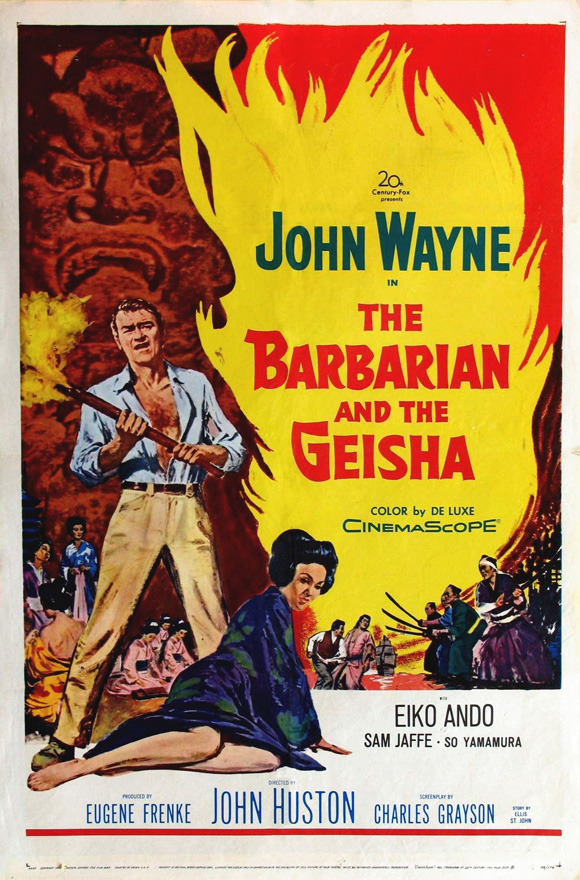 *NOTE: I have not written for this site in a while, so bare with me.*

In 1957, John Huston was fresh off Heaven Knows, Mr. Allison and Moby Dick, two films both shot and filmed in extreme and exotic locations. It was also the year that his great friend and collaborator Humphrey Bogart passed away. In short, he wanted to get away. His next two films, The Barbarian and the Geisha and The Roots of Heaven would be filmed in two very far and very remote areas. The first, Japan, and the second the jungles of Africa. While Africa would prove to be the most troubling, Japan was perhaps more dangerous. The Japanese society was still in the process of rebuilding itself after it's massive defeat in World War II, and a new generation of filmmakers were slowly taking away the old guard.

Huston's idea for the film was to shoot it like an authentic Japanese film, in the style of Ozu. However, that never came to fruition after the film was taken out of his hands by the studio, while he was shooting in Africa. While shooting on location, the film suffered many challenges. For one, it was hard to find a Japanese actress who would appeal to American audiences, and the lead actor, John Wayne felt wrong in the part and was constantly at odds with Huston (they even got into a fistfight at one point, which Huston lost). Finally, while shooting a scene with fire, the flames spread and caused the town they were shooting in to almost evict them.

In short, it was chaotic at least. The Barbarian and the Geisha is the story of Townsend Harris, an American diplomat sent to Japan in the 1850s to broker a treaty between the two nations. While in Japan, he apparently fell in love with a young Geisha girl. While the film was based off of a true story, you could tell it was heavily adjusted.

The acting, however, is pretty moronic. John Wayne is incredibly boring in his role. It seems like he's one word away from ripping on a cowboy hat, jumping on a horse and riding off into the desert. He seems so uneasy in his role, that even you feel awkward when he says something longer than a couple sentences. It's kind of embarrassing, and even more so establishes Wayne as a pretty one note actor. Eiko Ando, as Wayne's love interest looks very nice, but her chemistry with Wayne is so low that every scene they have together seems false. Her accent is inexplicably less in her voice over than in her onscreen performance. Was she dubbed or something? I need answers! Sam Jaffe, Huston's long time friend, shows up in a boring role that gives him nothing to do and even less to show. So Yamamura, as the Governor of the village gives probably the best performance in the film, even if it is overwrought. The script reads like cliche after cliche, but the strangest thing is that there are flashes of a much superior film hidden inside of this movie. There are moments where you can almost swear that there is something worth watching within the movie, and then it vanishes as quickly as it came. Whether those are bits of Huston's original cut or just random pieces, they make the viewing experience endurable. However, the film's undeniable strength lies in it's cinematography. Simply put, it looks great. There are bits and pieces that just stick out in your mind, and some shots that just look wonderful. It saves the film from sheer awfulness, and actually makes it watchable. The score is interesting, using plenty of authentic Japanese instruments, and enhances the film slightly.

It may not be very good, but there are some parts that are really intriguing. It makes me wonder what exactly Huston's vision looked like. Perhaps he included more scenes among the Japanese, or perhaps his style was different. I guess we'll never know, but it's interesting. As it is, the direction is one of the film's stronger points. There is a scene near the end of the film that is very well directed. Shadows are cast perfectly and silence creeps up upon the scene nicely. But the whole effect is ruined when Wayne barges out of his room and begins to talk. Damn it John!

Email ThisBlogThis!Share to TwitterShare to FacebookShare to Pinterest
Labels: conflicting visions, John huston, set in the past, strange