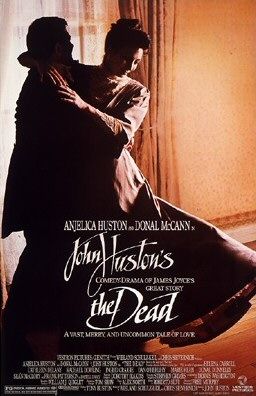 THE FILM:
The Dead was John Huston's last film. He was very sick at the time, and probably knew that his next film would be his last. So when choosing his project, he had to choose wisely. He chose The Dead, an adaptation of the James Joyce short story. It was very much a family affair, with his son Tony writing the screenplay and daughter Angelica playing the female lead. It was during the making of the film that his health deteriorated.

He died four months before it was released, and during the film making he suffered innumerable challenges. He relied on an oxygen tank to breath, and he couldn't go 20 minutes without it. Sometimes Huston would get stuck in his car, and be unable to get to the stage, and he would have to relay direction through his assistants. Despite these challenges, Huston made the film, based off a supposedly  "un-filmable" story. It was only after multiple revisions that Huston found the right approach, and with it, one of his finest films.

THE PLOT:
Greta and Gabriel Conroy are married, and they like each other, in turn of the century Ireland. They go to a party being held by three spinsters on January the 6th. After the party, they return to their hotel. That is the plot, seriously, that's it. To go into more detail would be frivolous without critical commentary, so that brings me to it.

THE CRITICISM:
The Dead is without a doubt the finest last film of any director with a sizable body of work, that I have seen. What Huston accomplishes in 72 minutes is what most filmmakers try their whole careers to accomplish. The film is so simple, yet its simplicity is its finest asset. Huston here manages to try something new, and for a man in his 80s, who is dying, that is quite a risk. And he pulls it off, of course. Some directors, like Hitchcock and Wilder have tried this approach, and the results aren't generally amazing. 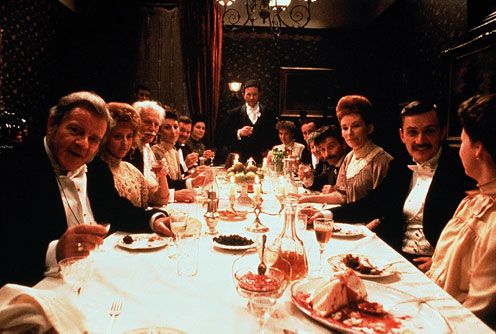 If you read the plot, you'll see that the film's plot is quite thin, I could sum it up in five seconds, so Huston relies on characters and mood to set it up. In order to do that you need two things: good actors and a good script. And he has both. Some might say that The Dead was an act of nepotism, and yes, Huston draws on his family. John cast Anjelica in three of his films, and under his direction she won an Oscar. Here she gives a performance that doesn't seem to amount to much, for the first hour.

Then, near the end, she is walking down the stairs when a tenor from the second floor begins to belt out a tune. I can't name it, but she stops and closes her eyes, swaying gently to the sound of his singing, almost in a trance. Then she goes home and tells her husband of a past lover, who came to her one night, having suffered a terrible sickness. He died, and she believes that she caused him to die, wandering in the rain. But I'm, getting ahead of myself.

The performances, Huston (Anjelica, that is) is absolutely terrific. She puts up a facade for the first hour, but then she slowly lets it slip, and you glimpse her. Donal McCann is absolutely terrific in the role of Gabriel, her husband. I hadn't heard of him before this film, and its a shame, his ending monologue is close to perfection. The supporting cast is flawless, consisting mainly of people that I hadn't heard of before, which helps you to believe that they are their respective characters.

The screenplay does the wonder of turning what has been called the greatest short story of all time into a motion picture. Tony Huston is more than up to the challenge. It has been said that John Huston had been trying to get the film made for some time, but he couldn't find the right approach, and one day it came to him. The story doesn't need to be jazzed up with flashbacks and unnecessary additions. The best way to adapt the short story is to just tell the story.

No embellishes, nothing. Tell it straight. It works. I haven't read the source material, but I want to now, based on the final scene alone. The score perfectly complements the film, striking a melancholy but optimistic chord. Indeed some of the lengthy dialogue scenes can be frustrating, especially when they harp on singing and turn of the century Irish-British relations, but for some reason you are still compelled. I feel that what really makes the film work are the characters.

They feel real. They feel like people you know, from Freddie the pathetic drunk, to Greta, the "perfect" woman. They don't beg any stretch of the imagination. The whole party reminds you of past experiences and perhaps with a hint of nostalgia. Then I bring you to the direction. In his last film, John Huston managed to create a truly awesome film experience. It doesn't have any explosions, or detectives, greedy prospectors or riverboat captains. It has real people. 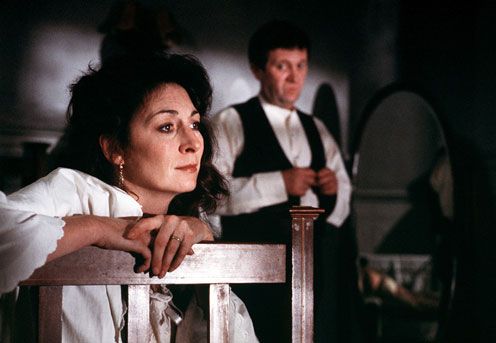 Huston manages to weave his camera through a scene so well, that it makes you feel that you are almost eavesdropping on someone else's party. By the end, you almost feel as if you know these people, and in a way you do. As the crisp snow falls on a forgotten Irish graveyard, we are reminded that we are all alive, but then we die, and time will pass us by. That brings me to my final comment: the title. It is perfect. It sounds as if the film is a horror film, but it is truly about the passage of time, how the dead can haunt the living from beyond the grave, but not in a scary way.

The dead hold a power over the living no matter how old and wise you are. They still cast a shadow over our lives, and we remember them until, perhaps, we join them. I debated giving this film a 9.5, but my sentimental side won over my few small problems. I'll end this review by quoting from the last narration, a fitting end to a terrific film.

"Like everything around me, this solid world itself which they reared and lived in, is dwindling and dissolving. Snow is falling. Falling in that lonely churchyard where Michael Furey lies buried. Falling faintly through the universe and faintly falling, like the descent of their last end, upon all the living, and the dead."

RANKED:
1. The Dead
2. The Asphalt Jungle
3. The Misfits
4. The Treasure of the Sierra Madre
5. Heaven Knows, Mr. Allison