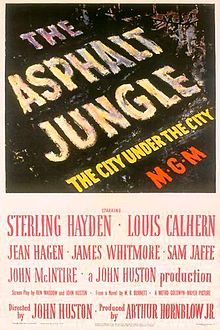 THE FILM:
1950. John Huston isn't exactly "hot stuff". His new project has no big name actors, and a plot that could have depressed anyone. It is about a bank robbery, and it's after effects. Not exactly box-office gold. Another problem. Star Sterling Hayden was a communist, and both him and Huston are on The Committee for the First Amendment. It seemed as if the studio just wanted to see what would happen. Good think Huston pulled it off.

THE PLOT:
"Doc" Riedenschnieder has just been released from prison. He is considered one of the foremost criminal masterminds of the time.Immediately after his release he is itching to pull of another heist, his last. Then he plans to retire to Mexico, he recruits heavy Dix. It's a Jewellery store robbery, and he knows he can do it, he just needs someone who will be able to sell the Jewels after the Robbery. He turns to Emmerich, a rich family man, who runs little things on the side, like having an affair with a beautiful blonde. 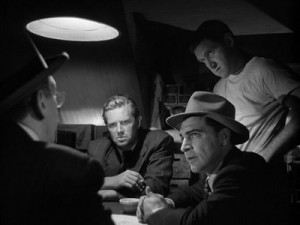 Unfortunately for Doc, Emmerich plans to double-cross him after the heist, and Doc knows it, but he goes on anyways. He recruits some other men, and at the same time Dix finds himself in a relationship with a woman whom he doesn't love, but who is devoted to him. SPOILERS. The heist doesn't come off the way Doc planned and he is faced with multiple double crosses and the cops on his trail. In other words, it's a typical Noir.

THE CRITICISM:
John Huston was born for Noir. He defined the genre with The Maltese Falcon, and his sharp wit and attention to detail was a perfect match to that film's sharp and direct dialogue. Here he works in the genre, but not in the tradition of films like The Big Sleep or Falcon, where there is some happiness. No, here no one is happy. They are greedy and selfish, and perhaps only Jean Hagen is the only non-cynical character, yet even she has an unhealthy selfish desire to nurture, to love Dix.

There is no hope in The Asphalt Jungle, it is one of the most depressing things I've ever seen. It is also one of the most realistic films ever to come out of Hollywood. The gritty, hopeless city presented here could be any major city in the US. New York, Los Angeles, Miami, it could be set in any of those. These characters have been rotting from the inside out, and their insatiable greed and lust can only lead to their destruction.

Yet you feel sorrow, you want them to have some kind of happy ending, and that is one thing that these people will never have. That brings me to the performances, uniformly excellent. Huston had a great knack for getting great performances out of actors, and this is no exception. Hayden has always been a unique actor. On his face is etched the pain and suffering of thirty odd years in the crime racket. You get the sense that he is running on fumes. 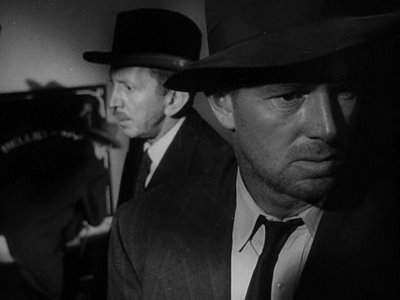 Hagen is, as I mentioned above terrific, she is one-minded in her obsession with Dix. Louis Calhern is slimy and, despite his good-guy act, he is rotting from the inside. His affair with Marilyn Monroe is just a way for him to embrace his true slimy nature. When he is questioned by the police, you can see him desperately trying to get himself out of the situation, lying until he can lie no more.

Also good is Sam Jaffe as Doc and James Whitmore. The film barely has a score, which may be due to artistic intent or laziness, but the lack of score reinforces the gritty reality of the film. The cinematography is amazing, delving in the shadows and murky depths that define Noir.

And finally the direction. As I mentioned above, Huston keeps it realistic, with little to no artistic flourishes, and it works completely. Huston was the perfect match for the material, and it certainly pays off.

RANKED:
1. The Asphalt Jungle
2. The Misfits
3. The Treasure of the Sierra Madre