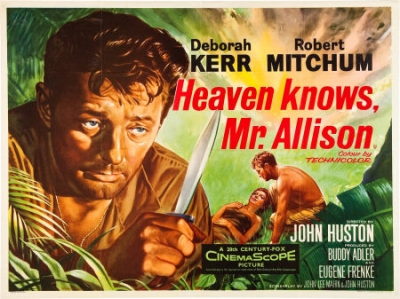 In 1957, Robert Mitchum is in Tobago, filming Fire Down Below. He arrives back in the United States, and he finds out that he has another gig. A marine and a nun stuck on an island. The island: Tobago.The film is called, Heaven Knows, Mister Allison. The plot alone draws comparisons to The African Queen. And there is Deborah Kerr, playing a nun. Again.

THE PLOT:
Corporal Allison was boarding a raft on a scouting mission, off of a submarine in 1944's Pacific. The Japanese bombed him, and he was left alone in the raft. When he came to, he was alone in the raft, in the middle of the Pacific. After a while, he drifted to an island. After checking out some abandoned shacks, he found Sister Angela, a nun, in the church. He falls asleep, and when he wakes up, Sister Angela is praying.

After initially meeting awkwardly, the two soon become comfortable together, and come close to being friends. It is when the Japanese land on the island, that the strange relationship is put to the test.

THE CRITICISM:
Just to make myself clear, I thought that this film was a pale imitation of The African Queen.  It's not a bad film, just not as good as that film. That said, it does have it's entertaining moments. I feel that it lacks that magic that was captured with The African Queen. Kerr and Mitchum have absolutely terrific chemistry, so the blame rests rather on the screen play. The film has a terrific setup, and then after a while, there is only so much you can do with a Marine and a Nun, without delving into some nasty business.

Unfortunately, because of the production code, you can only go so far. So then we are fed multiple moments of Mitchum acting macho while Deborah Kerr gets to sit on the sidelines and pray. There are only two characters for the whole film, and if they begin to get tiresome, you have a serious problem. Don't get me wrong, Deborah Kerr can act the part, and Mitchum is certainly very macho, but again, only to a point until it becomes tedious. Then the Japanese decide to make the island a base, and Mitchum falls for the nun. She of course, is engaged to Jesus.

The film is beautifully shot, in Colour and Cinemascope (widescreen). The lush island of Tobago never looked better. I spoke of the performances above, but to recap, Mitchum and Kerr were good, not great. The screenplay was awkward, and it felt forced at points, but the problem was the limitations of the production code.

Huston's direction was good (notice good, not great). I couldn't help but imagined how he felt whilst directing it. It feels rushed, the shots get the story told, but he doesn't add much visually. Overall I feel that it felt kind of like he was doing it for the money, and he was frustrated about it. You can tell that he was limited, and it made him frustrated. 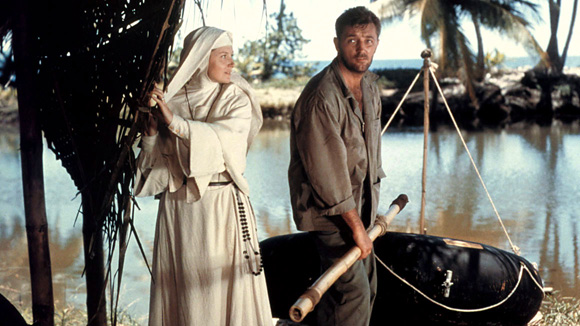 It was not bad, but not great. Overall, the word I would use to describe the film is limited. Limited in plot options, performances, direction and screenplay.

RANKED:
1. The Asphalt Jungle
2. The Misfits
3. The Treasure of the Sierra Madre
4. Heaven Knows, Mr. Allison