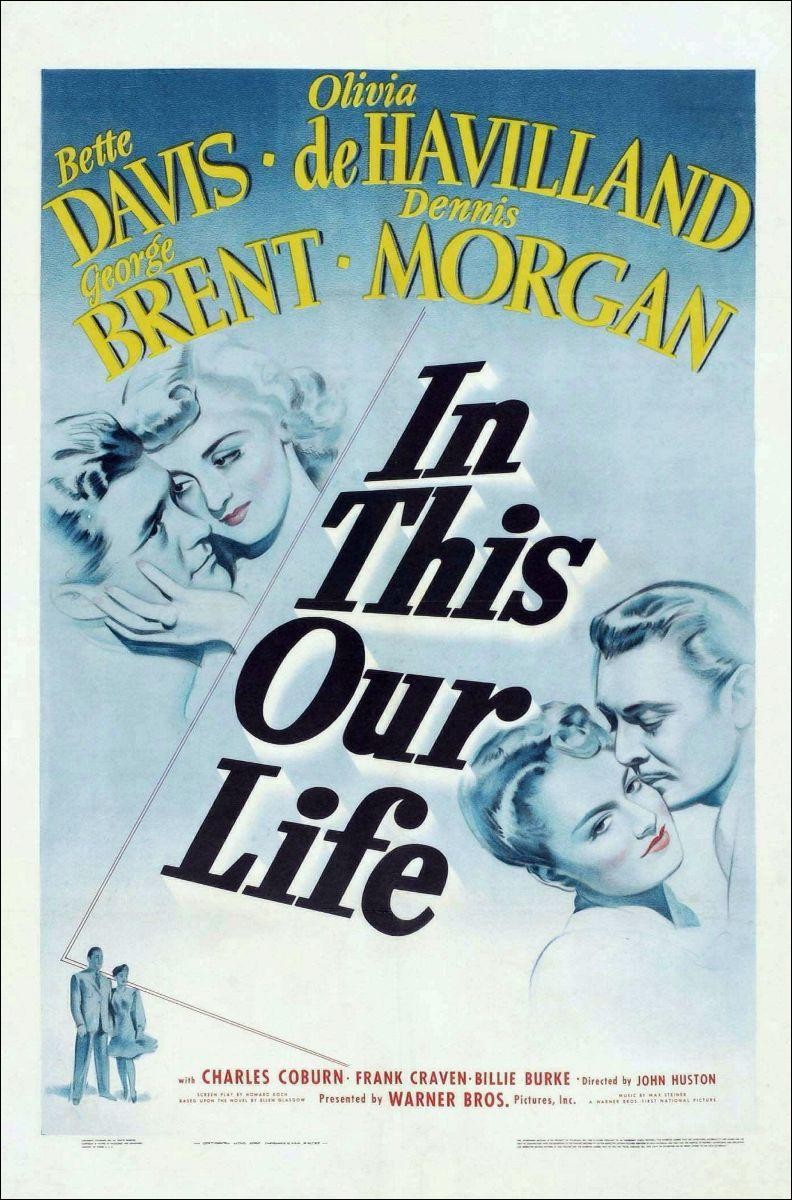 NOTE TO VIEWERS: Cinema Stripped Down will now only show the sections "The Plot" and "The Film" when the author deems that these sections are relevant enough to be featured. If the film has a boring, or uninteresting history, THE FILM will not be featured.

WELL, THAT WAS MELODRAMATIC

There we go. There's that word: melodrama. Hold on, let me say it again: melodrama. Has it sunk in again? Well I really can't stress it enough, this film is so melodramatic. I mean, I can handle melodrama as much as the next man, but this is just too much. This is pretty much the definition of melodrama, there's fighting, drama, cheating, romance, crying, insanity, murder, heat and a southern Gothic sense to it. And what makes In This Our Life bad? The fact that at every moment of plot you almost want to roll your eyes, and that some of the things that happen make you want to heckle the characters into oblivion.

What can the actors do? Well, pretty much nothing. Bette Davis and Olivia de Havilland were unfortunately bestowed with the ability to overact in increasingly melodramatic ways. Here, that point is proven. Katharine Hepburn once said of Meryl Streep, " Click, click, click," while referring to the wheels turning inside Streep's head. She meant to say that Streep never inhibits a character, just acts. Here, I believe that quote would be much better bestowed upon Bette Davis. Yep, it's that bad. Sometimes I can tolerate, and even enjoy Davis. But here, she goes way too far.

Her character is that of a woman who ditches her fiancee for her sister's husband and then wants her fiancee back again. She inhibits this shallow, over the top caricature with more over the top. She really overdoes it, and leaves the audience really despise her. Not the character, but Davis. When Davis "acts", she makes the audience really hate her for putting us through this shameful display of pure insanity. That sounds harsh, but I really can't express how I am feeling in any other way. I just got incredibly fed up while watching this film, and Davis was part of that. I'm not saving that Davis was bad, some would say she is amazing, but her style is just not for me, and this film is a great example of why. 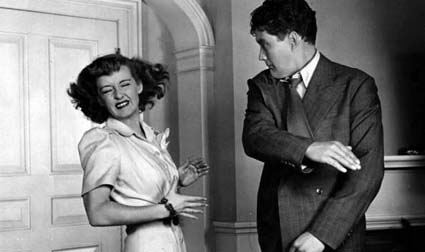 Olivia De Havilland also got on my nerves. She just seems to play the same character in everything. She plays the fragile woman who can be counted on roughing it out when it counts. In Gone With The Wind she does this, in The Snake Pit she does this, and in In This Our Life she does this. What I find aggravating about the whole thing is that she recognizes this, but she keeps doing it! Was she typecasted in this role, or was this just who she was? I know for sure that she was not such a saint, so perhaps this is all she was thought to do. I am sure she had great versatility, but here it just isn't recognized.

In the supporting roles,George Brent and Dennis Morgan play two men who were in love with both lead actresses at one point. While both their portrayals were soapy and over the top, I did really reel that Morgan was the best part of the film. His portrayal actually felt more than slightly realistic.  He offered up a believable performance in a very unbelievable film. He seems like a desperate soul, a lost person who can't quite find his place, and also misses his chance when he does strike something goal. Though he has limited screen time, I would have most definitely rather seen more of him than anyone else.

The film also has a subplot involving racism (Slight Spoilers Follow). Bette Davis hits and kills a little girl with her car and then blames it on the black family friend. He goes to jail, and the people are very prejudiced against him, and only our heroic team of Olivia De Havilland and George Brent can save him from Davis's careless accusation. This part of the film is actually handled quite well, and Huston treats the subject with grace, something I've never called him before. Indeed, it's heavy handed, but compared to the rest of the film it's To Kill a Mockingbird.

Although the actors really make this a complete and utter melodrama, they wouldn't be able to do anything without a truly terrible script. And boy do they get one. Every plot point is handled clumsily, and it makes the whole thing feel like a huge soap opera. This film is so over the top that it's one technicolour camera away from Sirkian heights of melodrama. Indeed, the script gives the film some pure and utter soap. It's not even funny, it's barely enjoyable (yes, I can easily see how one can enjoy a soap opera). A lot of this is mainly due to the script. 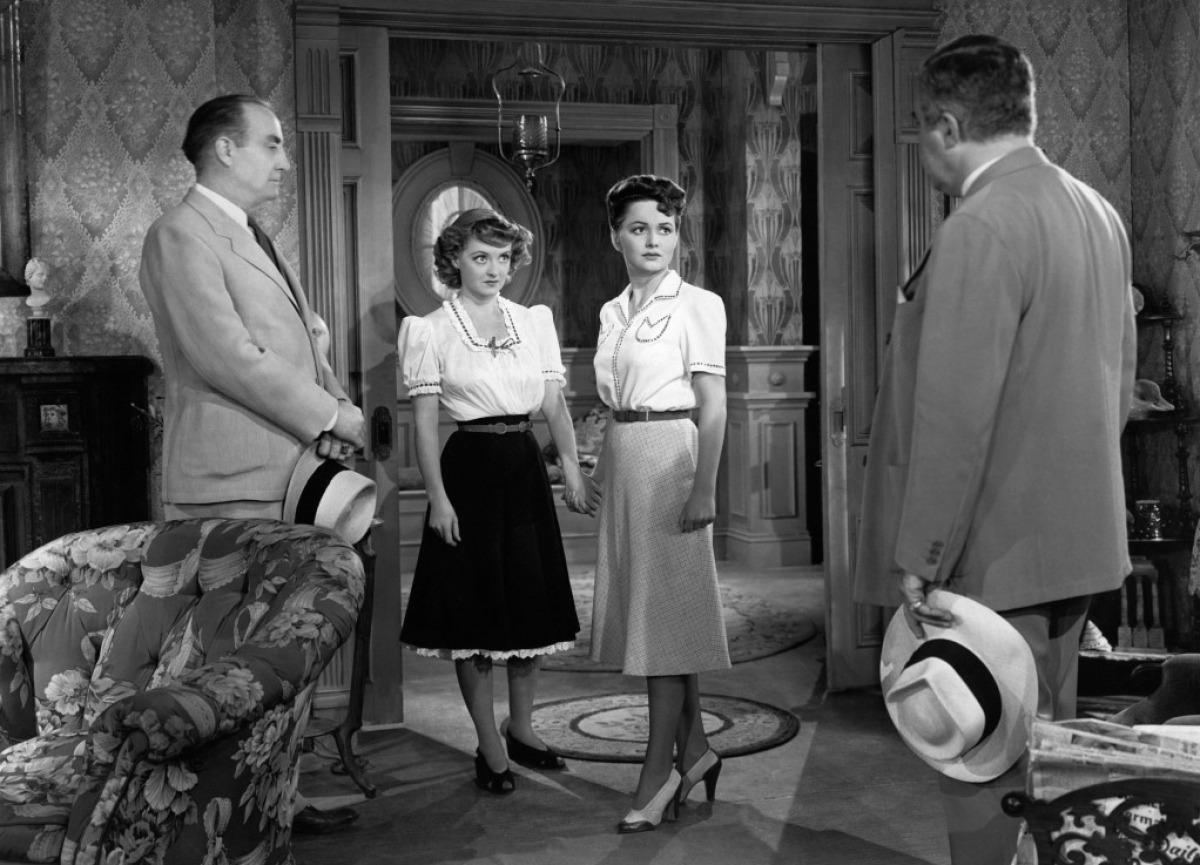 And oh god the score! It is so anonymous and uninteresting. It is almost as if someone held a jam session with a string quartet used to playing on "As The World Turns". It could have been worse, but if there is one thing I've picked up from Huston, it's that almost none of his films feature a good score. The cinematography is also quite anonymous. Unlike Huston's previous effort, which was full of great shots, In This Our Life is content with a couple close ups, but mainly just relies on a master for the whole film. It is the very definition of substance over style.

And now when I get to talk about Huston. In his sophomore film, John Huston turns 180 degrees away from his first film: "The Maltese Falcon". That film was interesting, and created a mood unlike anything seen here. Oh sure, this film has a mood, the kind of mood you expect to see on daytime television. The only two main reasons Huston made it was to help his friend Howard Koch, as this was one of his first screenplays (and then he wrote Casablanca), and to keep close to Olivia de Havilland, whom he was entangled with romantically at the time, and whom he later beat up Errol Flynn on the behalf of.