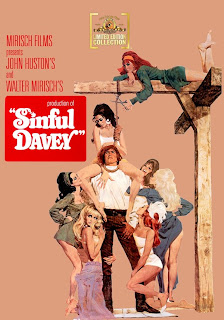 Sinful Davey would mark the beginning of John Huston's so called "dry" period. This period, which in Huston's eyes, would last from 1969 to 1975. He made many of his worst films during this area, and he blamed his decline on this film. It was basically forgotten after release, spending only a week in theaters. I had a devil of a time locating this film, eventually finding it on a limited release bare bones edition by MGM. The package it came in is so amateurish, I though in the beginning I was being duped. Anyways, there is a reason this film is little known. It was released six years after Tom Jones, and was generally thought to be a "rip-off" of that film.

The film cast a young John Hurt, ten years before he would break through in Alien and The Elephant Man, as the lead. The cast was filled out by a couple promising young actors and actresses, and Robert Morley, whom Huston had worked with on Beat the Devil and The African Queen. Huston had originally wanted to cast his daughter Anjelica in the lead female role. The producer disagreed, as Anjelica had only appeared in Huston's A Walk With Love and Death up until this point. Huston eventually agreed on Pamela Franklin, but this caused a rift between producer and director, a rift that widened even more when Huston refused to re-edit the film.

Today, where does this film stand? It has a 5.8 on IMDb (that's bad), and 33% on Rotten Tomatoes (also quite bad), and it is barely remembered, if at all. It is one of Huston's most forgotten films, and there's a reason for that....

THE PLOT:
Davey Haggart is a drummer in the British Army. One day, he deserts the army, and begins a life of crime. Davey is inspired by a man who may or may not be his father, an infamous criminal. Davey sets out to up his father, by committing the exact same crimes as him. He does this by dressing up as a Duke, and integrating himself into high society, while conspiring with a fellow pickpocket to rob the same Duke his father robbed. A small wrench is thrown into Davey's plans when Annie, a girl whom he befriended in his youth, is dead set on reforming Davey.

Annie also harbors a great love for Davey, an affection he does not return to her. While Davey seems to end up in bed with every girl he meets, he is still completely ignorant to Annie's love. Can Annie reform Davey before he suffers the same fate as his father, death by hanging?

THE CRITICISM:
....It's not very interesting. It's just an average film, through and through. There's nothing really special going on here, just your typical adventure film. The performances, direction, script, all are perfectly average, and they never excel beyond expectations. This isn't a bad film, but it isn't very good either. As Huston stated himself, it feels very dry. Some parts are exciting, and entertaining enough to light a smile on your face, but nothing here indicates any kind of genius whatsoever.

The best part is easily John Hurt. Hurt is a great actor, and he proves here that he charisma to spare, and was a great lead actor all the same. It's the kind of part that requires little acting, but heaps of presence. Despite being virtually unknown at the time, Hurt acts like he owns the place, and as a result totally owns the character of Davey Haggart. With a better script and director, this could have easily been awesome. However, we do get a glimpse of what could have been through Hurt. Despite the film itself, he excels. I could have easily watched just Hurt going around the country robbing people. That would have been a movie.

The rest of the cast is uniformly blah. We never really care for many of the characters, and the film's light tone makes it hard for us to really feel any stakes towards Davey's fate. Pamela Franklin is the wide-eyed do-gooder who tries to save Davey's soul. Every time she's on screen I checked my watch. She's just not that interesting, and her character's mission doesn't make much sense. I watched the film an hour ago, and she's already began to fade from memory. The rest of the cast, Robert Morley, Nigel Davenport and Ronald Fraser make little impact on the viewer and are easily forgotten, as is most of the movie.

I can't really offer any suggestions as to what would have made the casting better, but I can definitely describe what could have been done to improve the script. Make. It. Darker. I understand why the film wanted to be "light", it appeals to more people. But there is just no sense of danger here at all. Davey's escapades are very entertaining, but with a little malice, or stakes, they could have been much more interesting than what they are. The film feels very "cute", it never really wants to be more than it is. It is in that respect, one of Huston's most sincere films. However, sincerity doesn't equal a good film this time around. 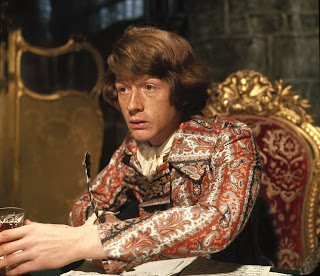 The cinematography is certainly very pretty to look at, although the transfer to home video is very poor, rendering everything looking mute and dull. The film's locations are very nice indeed, and some of the scenes of John Hurt robbing people at a ball are very inventive and help to further the comedy of the situation. the score is rather unremarkable but it, along with the opening song are still quite effective within the movie itself, often helping with the light tone.

The direction is quite typical of Huston, it feels relaxed as if he is just letting the story take place at it's own pace.  It does help that the film has a relatively short running time. At 95 minutes, it certainly does not feel overlong. It could have benefited from a director who was more in tune with what he wanted from the film, but I can't bash Huston's direction completely, as there is nothing that really stands out as awful. There is also, however, nothing that stands out as good either, quite indicative of the film itself.

Overall, is Sinful Davey bad? No. Is it good? Not really. What it is is an hour and a half of John Hurt running around Scotland. You could do worse.

Email ThisBlogThis!Share to TwitterShare to FacebookShare to Pinterest
Labels: enjoyable, ireland, John huston, light, set in the past