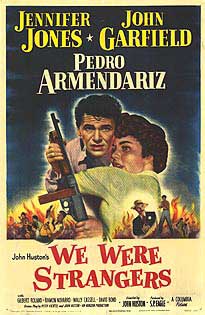 THE FILM:
Huston was back. The Treasure of the Sierra Madre was a success, and the war was over. He was back in the game, so he felt the urge to make another film. His next project marked the beginning of a short lived partnership with Sam Spiegel. It was called We Were Strangers. The film was partially adapted from the novel "Rough Sketch", and Huston wrote the script with future collaborator Peter Viertel. They wrote a whole section of the script while staying with Ernest Hemingway, and Hemingway's suggested ending was dropped for being too bleak.

Huston had originally wanted to cast unknown Marilyn Monroe in the lead role, but Spiegel did not want to pay for a screen test. They went with Jennifer Jones and John Garfield in the leads, after getting them on loan from their retrospective studios. Today the film is virtually unknown, it has a 6.6 on IMDb and no score at all on Rotten Tomatoes. Perhaps the future Cuban Revolution made this film seem stale, and that helps explain it's descent into obscurity. Or perhaps it's just a bad film.

THE PLOT:
China is a bank teller living in Cuba in 1933. Her brother is working with a group of revolutionaries who are trying to depose the government. Her brother is caught handing out leaflets for their cause, and he is shot and killed. China grows upset (understandably) and joins the revolutionaries herself. She meets an American named Tony Fenner and he comes up with the plan  to blow up all of the heads of government. To do this, they will use China's house as a base. They will tunnel under the ground to a nearby cemetery. Then they will kill a prominent politician and blow everyone at his funeral up.

The plan gets complicated when the man who murdered China's brother finds China and begins to suspect she is doing something shady. Also, China and Tony begin to fall for each other, all the while Cuba descends into a totalitarian state. 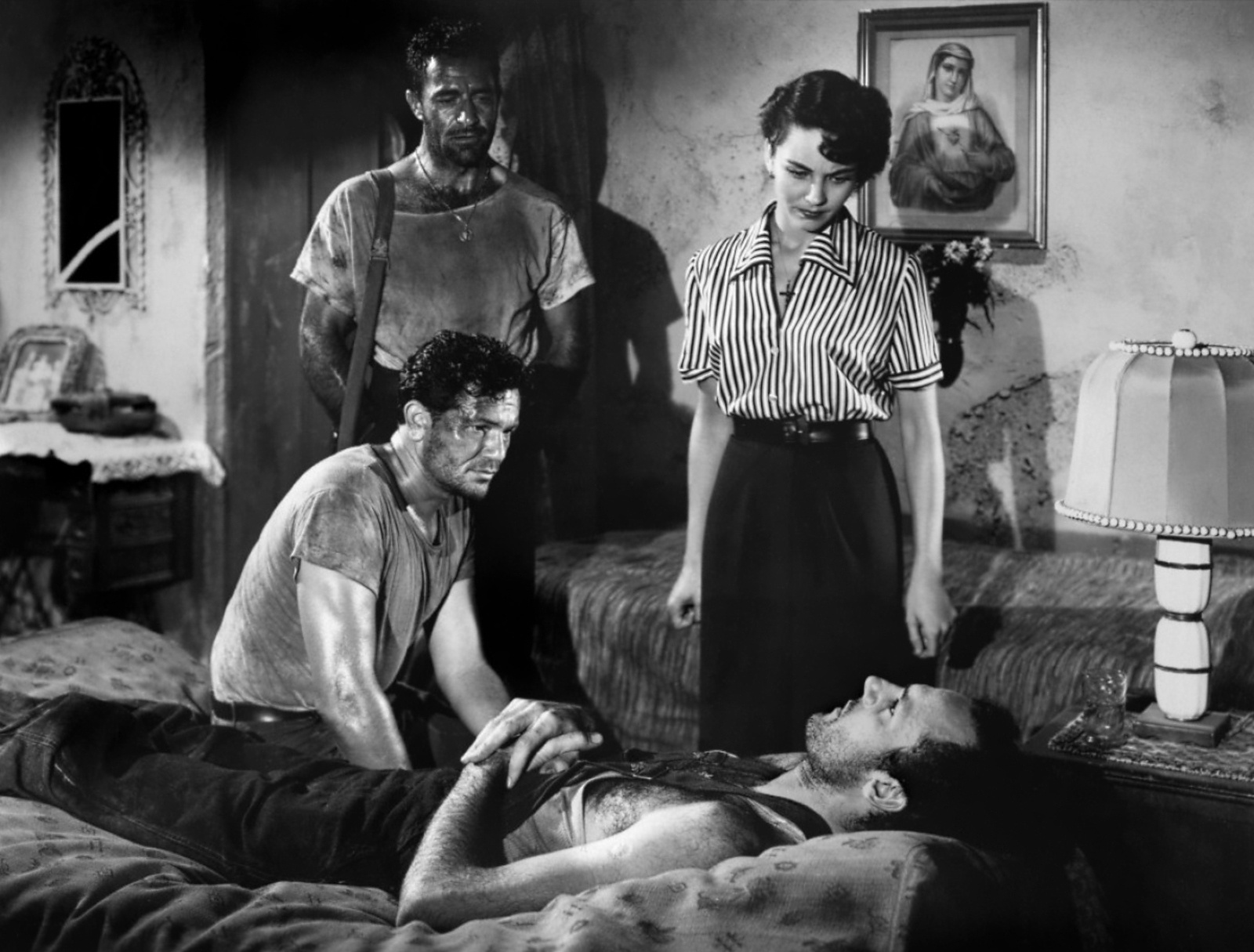 It is hard to watch this film without taking into account the revolution in Cuba in the late 1950s and early 1960s. That revolution, which put Castro into power, makes this film seem very outdated. Even though it is set in 1933, this film still feels heavily dated and unrealistic. That is not the only problem. This film tries to achieve two objectives, to be a political thriller and a romantic drama, and it fails on both accounts. It appears that Huston just couldn't direct a thriller. Both The MacKintosh Man and The List of Adrian Messanger were spectacularly thrill less.

It is not as if the film is a mess, but it just had no sense of direction. With a better director, someone who cared more, this could have been a pretty good thriller. But Huston's tepid direction is nothing short of boring. Even the veteran actors on display could not save the film. Jennifer Jones is a great actress, but here she is not good. Her role is so poorly written that it just screams cliche. Her Cuban accent is rough and unbelievable. Her line deliveries are stodgy, and her character is just boring. The revenge plot device runs out of steam quickly, and we are left with people digging a tunnel for an hour.

John Garfield is a good actor when given good material, which he is not here. His character is from average
from the get go, and it hurts his performance dearly. He is not accomplishing anything new in this film, and his persona wears thin quickly. The one standout in the cast is Pedro Armendariz. His character's scenes are few, but he has one standout scene which he excels in. That scene is also the highlight of the film, due much to Armendariz's talent.

The script seems to never know what it wants. It jumps back and forth between political thriller and romance. The romance seems forced, and the political side seems dated. And of course, the thrills are non-existent. The script however could have been improved, and it could have made for a good film. That, unfortunately, was not the case. 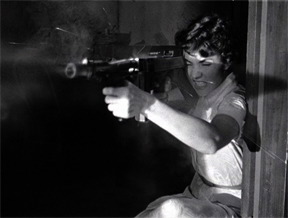 The cinematography is actually quite good. It is shot like a film Noir, with terrific lighting. However, Huston's camera refuses to be original or move much. It stays completely still, bringing an air of stuffiness to the screen. The score is good enough to listen to, but you forget about it completely after the film ends. It is just like the film, unmemorable.

I have talked often about Huston's laid back style of direction.  It can definitely work for some kinds of films, but you can not direct in a thriller in a relaxed fashion! The whole point of a thriller is to thrill, not to just show stuff that can be considered thrilling. You have to put your camera into the scene, you have to make audiences feel the stakes. This film does none of that. And of course, the film is so anticlimactic. **SPOILER ALERT** Just after they kill a politician and are having the bomb made, they find out that the funeral is being held somewhere else. All the work they did was for nothing, and that's it. That's the end. Then there is a shootout and the revolutionaries win! **SPOILER ALERT**

It feels so false, that it becomes hard to take the film seriously. Perhaps I am bashing this film too hard, but I can't help it. This kind of boring, thrill less exercise feels like a waste of my time. It is not that bad of a film, but it is definitely not as good as it could have been. It left me just as quickly as it came to me, and it is one film I do not think I will see ever again.

Email ThisBlogThis!Share to TwitterShare to FacebookShare to Pinterest
Labels: John huston, political, set in the past, war