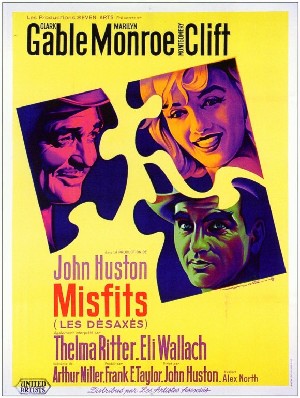 THE FILM:
Made in 1960-1961, The Misfits is a very unique production. It was both Clark Gable and Marilyn Monroe's last completed film. It was written especially for Monroe, by her last husband Arthur Miller, at the end of their marriage. It also starred Montgomery Clift, who was notoriously unstable following his car accident, and relatively unknown character actor Eli Wallach. Perhaps the only stable part was Thelma Ritter, a well-known, reliable character actor. Even the director, John Huston, was a wild card. The production seemed doomed.

THE PLOT:
The Misfits opens in Reno, Nevada, where young divorcee Roslyn is staying, while waiting for her divorce to come through. She is with her friend, Isabelle, and they stop in a cafe. There, they meet Gay Langland, a cowboy who has seen better times. Roslyn decides, in the spur of the moment, to accompany Gay to his ranch, in the desert. 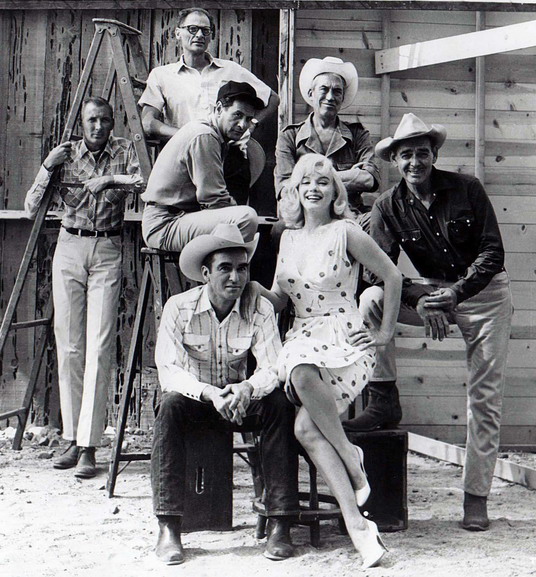 To avoid giving away too much, I'll describe the rest of the plot in much broader strokes. They spend the rest of the film mainly in the desert, where we also meet Guido, a younger ranch hand, with an instant infatuation to Roslyn. The film also includes Pierce, a Rodeo man, who's gone way past his prime, but continues despite this.

THE CRITICISM:
I`ll begin with the actors. Marilyn Monroe was not a great actress, but she fit certain roles. This was not a `typical` Monroe role, but she does well. I can`t help but feel that her performance was desperate, and it works well at times, while failing at others. It is an average performance, but it certainly ranks among her greatest. However the main acting achievement on display here, was that of Clark Gable, in his last performance.

Gable was always cast as a matinee idol, and he indeed has great looks and a wonderful screen personality. Unfortunately, he always played the same character, almost. Even Gone With the Wind dosen`t fully break the mold. Here, from the start, it`s something different. The charm and wit are still there, but buried underneath are layers of sadness. You get a sense that his time is passed, and he can`t cope. The scene that shows this best, is when Gable, elated at seeing his kids, comes back to bring Roslyn to see them.

They`ve already left, and he breaks down in drunken agony. It`s his best performance. Also we have Thelma Ritter, bringing her usual amount of wit and pathos to the film. Eli Wallach is very slimy and completely one-minded in his obsession for Roslyn. Montgomery Clift is unstable and shaky, playing an unstable and shaky rodeo clown. It`s his last great performance.

Now to the writing. It is not Arthur Miller`s best, he wrote it with the purpose to provide his wife with a good role. The plot is interesting however, and the film itself is well done, so this is not a major problem. The cinematography is equally as desolate, and captures the feeling of time lost, and a world that has moved on, and left you behind. Now, for my last criticism, I turn to the direction.

Here, Huston tones it down slightly, and gives us a more subdued film, which is perfect for the subject. He was really a man who knew when to make his film experimental, and when to make it conventional. Here he goes the safe route, while still retaining the beauty of a film about loss. It works. In Huston`s career, this may rank as a minor achievement, but the talent on display is undeniable. It is a beautiful film, that ends with one of the most moving moments in Huston`s entire catalog. I`m going to describe that moment now, so I put up a big SPOILER alert. 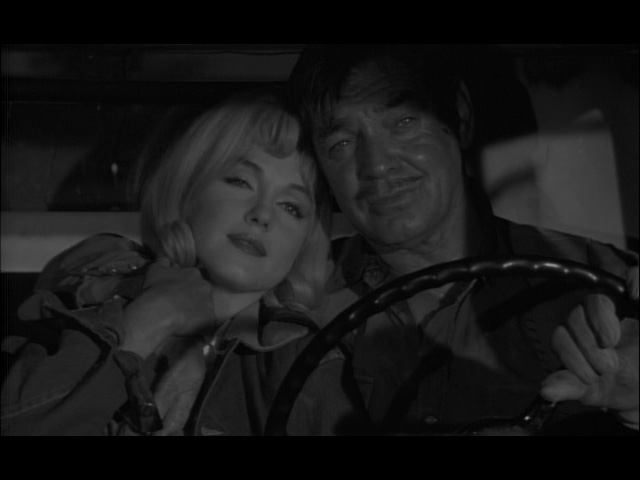 Gable and Monroe are driving home, they have found love in a strange way, but Monroe wants to know if they`re going in the right direction. (I copy of IMDb`s quote section).
[Last lines]
Roslyn: Which way is home?
Gay: God bless you girl.
Roslyn: How do you find your way back in the dark?
Gay: Just head for that big star straight on. The highway's under it. It'll take us right home.

That`s pretty much all I have to say.