John Huston: The Man Himself 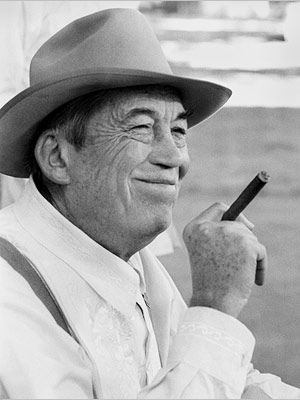 I realized yesterday that I had forgotten to talk about John Huston, as a man. To begin, he was born in Missouri, his father was character actor Walter Huston. The Huston's traveled quite a bit, and John was a very sickly child. He was committed to a sanitarium at one point, but after a miraculous recovery, he sought out his passion, boxing.

He traveled from job to job,  until he settled in movies. He gained street credit for helping with some scripts. This helped him to make his first film, The Maltese Falcon, which catapulted Humphrey Bogart to stardom. His career would be completely erratic, ranging from typical war films like Across the Pacific to musicals, like Annie. He began to act in the 60s, and his performance choices were almost as strange as his directorial ones.

He remains today an enigmatic figure, and his films live on, the great ones are always there, but that is not the point of this site. The point is, I want to use his films as a way of trying to understand the man, to come find some forgotten gems, and some overrated ones as well.
Posted by Unknown at 14:33